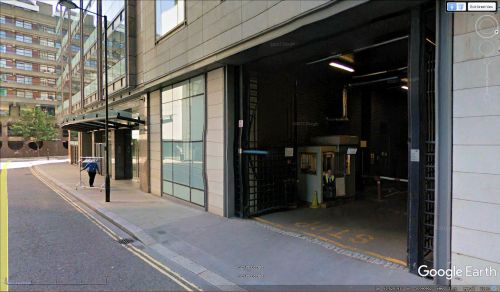 The Robin Hood Court at this site was recent history in 1720 / Google Earth Street View. 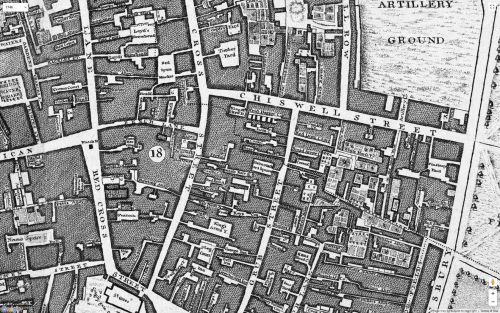 John Rocque's map of London and Westminster (1746), centred on 'Haberdashers Square', which according to John Strype (1720) 'was made out of two old ones, viz. Paviers Court, and Robin Hood Court' / Locating London's Past.

Robin Hood Court was located in the area immediately north of Silk Street and west of Milton Street, where now a large law firm has its headquarters.

John Strype in 1720 (see Allusions below) mentions 'Haberdashers Square, very genteel, with new well built Houses. The Court is square, and inclosed in with Palisade Pales, except a handsome passage to the Houses round about; and in the midst is a Dial', adding that '[t]his Court was made out of two old ones, viz. Paviers Court, and Robin Hood Court'. Haberdashers' Square was situated a few tens of meters west of the long vanished Grub Street from which it was reached via a short alley that looks relatively narrow on John Rocque's 1746 map of London and Westminster (see map detail below). The point where this alley led west from Grub street seems to be very close to the entrance to the underground parking lot of the law firm. Henry Harben's earliest reference to Robin Hood Court is Ogilby and Morgan's Large and Accurate Map of the City of London (1677), but scans of this map available on the web (see Maps section below) do not include the name of the street.[1] The earliest occurrence IRHB can verify is that in William Morgan's 1682 map of London, where it figures as 'Robinhood Court'.[2] Strype makes it clear that Robin Hood Court was already (recent) history when he wrote in 1720. Robin Hood Court is listed in several 18th century directories and address lists (see Gazetteers below), While one can of course not rule out the possibility that the name lingered after the court was gone, it seems most likely that the name simply lived on in the directories through uncritical borrowing from earlier compilations. Lockie's Topography (editions of 1810 and 1813) was based on first-hand knowledge, and it does not include this particular Robin Hood Court.

Grubstreet, very long, coming out of Foresteet, and running, Northwards, into Chiswel street; but some small part, to wit, from Sun Alley to Chiswell street, is not in the Ward, but in the Liberty of Finsbury. This Street, taking in the whole, is but indifferent, as to its Houses and Inhabitants; and sufficiently pestered with Courts and Alleys, the Names of which are as followeth.

Lunds Alley, long and ordinary, falls into Moor lane. Honysuckle Court, pretty good, with new built Houses. Flower de lis Court, very small and ordinary. Little Bell Alley, but mean. Flying Horse Court, long but ordinary built; and, by consequence, the Inhabitants answerable. George Inn, for Livery Horses. Nags Head Inn, lately rebuilt, and fitted up handsome; with good Stables, both for Livery Horses, and a Horse Courser; being built out of a Place called Soldiers Court, which was before old and decayed.

Over against the Pump, is a pretty good Court, without a Name. Oakley Court, large and open; the greatest part, at present, unbuilt, and lying wast. Butlers Alley, narrow and ordinary; giving a passage into Moor lane, where it is pretty broad. Cross Keys Court, indifferent large, and old built; leads into Halfmoon Alley, and so into Whitecross street. Maidendhead Court, pretty handsome, and indifferent well built and inhabited. Great Bell Alley, small, but indifferent good. Haberdashers Square, very genteel, with new well built Houses. The Court is square, and inclosed in with Palisade Pales, except a handsome passage to the Houses round about; and in the midst is a Dial. This Court was made out of two old ones, viz. Paviers Court, and Robin Hood Court. Sun Alley, but small.[3]