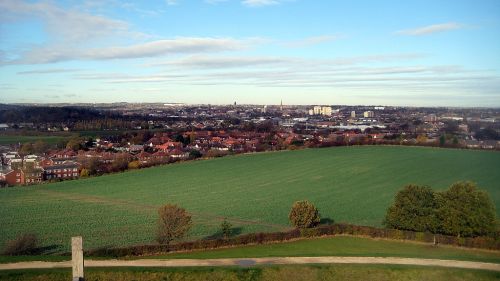 A view across to Wakefield city centre from the site of Sandal Castle / Mike Kirby, Creative Commons, via Geograph.

Wakefield is now the centre of the large metropolitan district known as the City of Wakefield, but in the late Middle Ages it was a small town or large village. It is first mentioned in Domesday Book (1086) where it occurs as Wachefeld.[1] The most likely etymology is "Waca's field", where "field" means "stretch of open country". Smith[2] at first suggests this etymology, but then decides that "wake" probably was from OE "wacu", meaning a "watch" or "wake", and that therefore the name referred to an annual feast or festival held at Wakefield. However, there is no evidence whatsoever for such a festival in the pre-Conquest period. As the first suggestion assumes less, I think it should be adopted.

The Pinder of Wakefield

Perhaps Wakefield's most famous citizen during the early modern period was the legendary Pinder, George à Greene, the hero of the ballad of the Jolly Pinder of Wakefield (Child 124). At least two localities in or near Wakefield have been connected with him: Pinders Fields and a pinfold near the Westgate. In addition, the allusion in Richard Braithwaite's Drunken Barnaby's Journal (1638) cited below, if taken at face value, strongly suggests there was a public house named after George à Greene at Wakefield.

"But hast my Muse in colours to display,
Some auncient customes in their high roade way,
By which thy louing Countrey men doe passe,
Conferring that now is, with which once was, [p. 203:]
At least such places labour to make knowne,
As former times haue honour'd with renowne.
So by thy true relation 't may appeare
They are no others now, then as they were,
Euer esteem'd by auntient times records,
Which shall be shadow'd briefly in few words.
The first whereof that I intend to show,
Is merry Wakefield and her Pindar too;
Which Fame hath blaz'd with all that did belong,
Vnto that Towne in many gladsome song:
The Pindars valour and how firme he stood,
In th' Townes defence 'gainst th' Rebel Robin-hood,
How stoutly he behav'd himfelfe, and would,
In spite of Robin bring his horse to th' fold,
His many May games which were to be seene,
Yeerely presented vpon Wakefield greene,
Where louely Iugge and lustie Tib would go,
To see Tom-liuely turne vpon the toe;
Hob, Lob, and Crowde the fidler would be there,
And many more I will not speake of here:
Good god how glad hath been this hart of mine
To see that Towne, which hath in former time,
So florish'd and so gloried in her name,
Famous by th' Pindar who first rais'd the same?
Yea I haue paced ore that greene and ore,
And th' more I saw't, I tooke delight the more,
"For where we take contentment in a place,
"A whole daies walke, seemes as a cinquepace:
Yet as there is no solace vpon earth,
Which is attended euermore with mirth: [p. 204]
But when we are transported most with gladnesse,
Then suddenly our ioyes reduc'd to sadnesse,
So far'd with me to see the Pindar gone,
And of those iolly laddes that were, not one
Left to suruiue: I griev'd more then Ile fay,
[...][3]

With that the smug-fac'd Pluto shook his vestment,
Deep ruminating what the weighty Jest meant,
Calling to mind old Dodonæus Herbal,
With Taciturnity and Actions verbal,
Quoth he, I care not for Friend or Kinsman,
Nor do I value honesty two pins man:
But 'tis a Maxim Mortals cannot hinder,
The doughty deeds of Wakefields huff-cap Pindar,
Are not so pleasant as the fair Aurora,
When Nimrod rudely played on his Bandora.[4]

[English text:]
Turning thence, none could me hinder
To salute the Wakefield Pinder;
Who indeed's the world's glory,
With his Cumrades never sory.
This the cause was, lest you misse it,
Georgies Club I meant to visit.

Streight at Wakefeeld was I seene a,
Where I sought for George a Greene a,
But I could find no such creature,
On a Signe I saw his feature:
Where the strength of ale so stirr'd me,
I grew stouter farre than Geordie.[5]

From Leeds I went to Wakefield, where if the valiant Pindar had been living, I would have played Don Quixot's part and challenged him; but being it was so happy that he was dead, I passed the town in peace to Barnsley, and so to Wortley, to Sir Francis Wortley's ancient house.[7]

Wakefield, a fair, uniform, large Town, well situated in the W. R. and Agbridge 100, 20 Miles S. of York, with 2 Markets on Thursdays and Fridays for Cloth, Provisions, &c. a great Clothing Town. It is noted for a Battle between the Houses of Lancaster and York, where Richard Duke of York Father to Edw. IV. was slain, whose Head was afterwards crown'd with Ivy at York Castle. In this Town was born John Green, the famous Pinder, who fought Robin Hood so manfully. It stands on the River Calder, over which is a fair Stone Bridge, and on it a fine Chapel, built by the said King Edward IV. in Memory of, and to pray for those, who with his Father lost their Lives in that Battle.[8]

Wakefield in the ballads