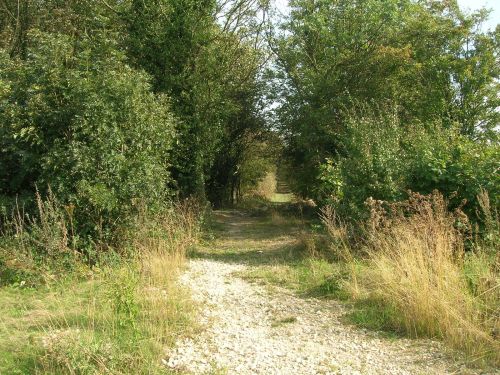 Path off the A6021, the first few metres of the original course of Doncaster Road, part of the Roman road or 'Watling Street' / JThomas, 15 Sep. 2011; Creative Commons via Geograph.

In the Gest of Robyn Hode, Robin Hood sends his men to 'Watlinge Strete' to look out for wayfarers. 'Watling Street' is of course the name of the Roman (and pre-Roman) road from Dover to Wroxeter, but during the Middle Ages and the early modern period the name was also applied, at least locally, to several other stretches of Roman road, including two or three in Barnsdale.

Since the 1970s it has been generally assumed that the Sayles to which Robin Hood sends three of his men to look out for wayfarers should be identified with Sayles Plantation near Wentbridge. In Barnsdale, at Barnsdale Bar, the Great North road forks into a north-westerly and a north-easterly branch, both of which were called Watling Street and both of which pass through Wentbridge. The name is recorded for the north-westerly branch (now reincarnated as the A639, Doncaster Road) from the 13th century. A charter dating from the 13th or 14th century refers to a piece of land in 'the field of Wrangebroc near Watlingstret'.[1] The north-easterly branch (more or less coinciding with a stretch of the modern A1), which arose during the 14th century, is recorded as 'Watlynge Streete' or similar in the 15th to 16th centuries. One of these forks of the road would be the Watling Street of the Gest if the Sayles were located near Wentbridge. However, a close reading of the poem shows that a Sayles located near Wentbridge is incompatible with the plot. For this see the page on Sayles Plantation (Barnsdale). Instead, as noted by a Yorkshire local historian in the 1890s, Sayles must have been located a few kilometres to the south in the Campsall–Burghwallis area south of Barnsdale Bar. For this see the page on Sayles (Barnsdale). There is also here, c. 250 metres north of the original location of Robin Hood's Well, a stretch of '[s]upposed Roman road'.[2]

The references to Watling Street in the Gest (see quotation dated c. 1500 below) add local colour, and there is little doubt its author knew the area well. Some regard the use of 'Watling Street' to refer to roads other than the famous one from Dover to Wroxeter as mistaken, but this is arguably in itself a mistake. Surely it is not for posterity to judge what people of a past age ought to have called their roads, and in fact the use was quite widespread. Thus the Great North Road was called 'Watlinge strete' between Castleford and Bramham from at least the early 13th century to the mid-16th century.[3] The road from Catterick in the North Riding of Yorkshire to Corbridge in Northumberland went by the same name. Other examples are the road from Manchester via Affetside to Ribchester, a stretch of the Roman road in Fewston (West Riding of Yorkshire) from Knaresborough to Ilkley, a road in Ossett and that from Slaidburn to Bowland Forest (West Riding of Yorkshire). All of these local road names appear to be lost. However, a surviving example is 'Watling Street Road' in Preston, Lancashire, which connects the districts of Ribbleton and Fulwood.[4] John Leland in his Itinerary (see quotation dated c. 1535-43 below) applies the name to several stretches of road in the West Riding; the last of them seems to be the stretch of the Great North Road running through Barnsdale.[5] In 1407, the name 'Watlynge Strete' was applied to 'a street that led east from the south-east corner of the precincts of St. Paul's in London, becoming Budge Row after about half a mile'.[6]

[Gest of Robyn Hode; c. 1500:]
and walke up to the Saylis
and so to Watlinge Strete
and wayte after some unketh gest
up chaunce ye may them mete[7]

[John Leland's Itinerary; c. 1535-43:]
Thens [i.e. from Wetherby] over a stone bridge on Warfe to [...] Aberford [...] on Watheling-Streate a 6. miles, and or ever I cam to this thorough fare I saw by the space of 2. or 3. miles the very playn crest of Watheling-Streat.
Thens by the strait crest of Watheling-Streat a 3. miles or more, and then leving it on the righte hond I went to Brotherton [...] a 3. miles: and then by a causey of stone with divers bridges over it [...] From Fery-bridge to Wentbridge . . . miles, and so to Dancaster . . . miles. I sawe by certaine miles or I cam to Dancaster the very mayne crest of Wathelynge strete.[9]

[Edward Miller, History and Antiquities of Doncaster; 1804:]
[...] Hop-cross Hill [...] a remnant of the old Roman road or causeway; which road, may still be traced southwards, from this town to Martin, near Gainsborough; to Littleborough, and from thence to Lincoln; — northwards, its vestiges are more perfect on Scawsby Lees, Barnsdale, and so to Castleford.[10]