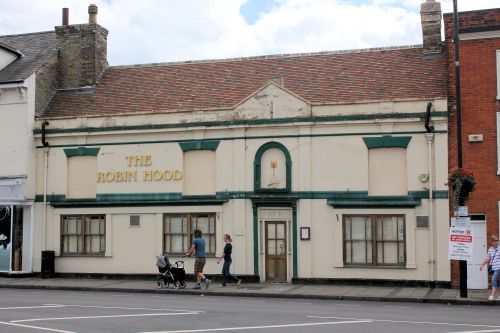 Housed in a Grade II listed, altered 18th century building, the Robin Hood at 11 Market Hill in St Ives traded under that name from 1795 or earlier to March 2012, when it closed. As of 2017 there were said to be plans to reopen it as a restaurant/bar.[1]

Before the Robin Hood came into existence, two pubs occupied the site: the Angel and the Swan. At least one of these may have dated back to the 15th century, for during work on the building in 2014 part of a roof of that date was found incorporated into the present structure. By 1789, when the properties were purchased by Thomas Tenison, archbishop of Canterbury, the Angel had become the White Swan and the previously single Swan had become the Three Swans. The Angel/White Swan, the eastern half of the present structure, was occupied by other businesses from 1806, being a hairdresser's from the 1850s to the 1920s, at which time the two buildings were combined into the present structure. Thus one Robin Hood was made out of four swans.[1]

The 1851 census lists a James Meadows as "Carpenter & Publican, sign of the Robbins Head", though before and after that time the pub is referred to as the Robin Hood or similar.[1] First listed in 1847,[2] the form "Old Robin Hood" continues to appear until 1945 if not later.[1] Further information on publicans for the years 1847 to 1914 can be found at Pub History. In the 1861 census the address is given as 10 Sheep Market.[3] Status is listed as "Extant" in the info box, for the name is clearly still alive.