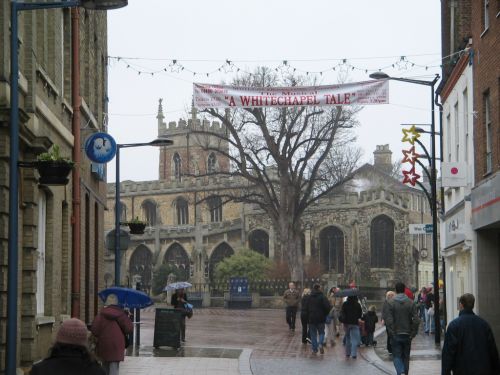 Huntingdon town centre, looking north along the High Street towards All Saints' Church / Will Fox, 1 Jan. 2006, public domain, via Wikipedia.

Huntingdon, formerly the county town of Huntingdonshire, now relegated to the status of a market town in Cambridgeshire, does not in itself have any clear connection with the outlaw, but from c. 1598 on Robin Hood has been frequently portrayed as earl of Huntingdon. He was endowed with this title by minor Elizabethan dramatists. More recently the idea has been especially popular with film makers.

A tragedy with a lowborn criminal as its hero would not have sat well with Elizabethan theatre audiences, at least not with those segments who could afford the more expensive admission fees, so when it was decided that a proper Robin Hood tragedy must be written and staged, it was probably inevitable that the yeoman hero must have some title foisted on him. This was not entirely without precedent, for Richard Grafton in 1568 claimed to have read "in an olde an auncient Pamphlet" that Robin Hood "discended of a noble parentage: or rather beyng of a base stocke and linage, was for his manhoode and chiualry aduanced to the noble dignitie of an Erle". Evidently Grafton's pamphleteer had not quite been able to make up his mind.

When Anthony Munday and Henry Chettle (et al.?) in their dramas – what was probably initially conceived as one drama became two – of The Downfall and Death of Robert Earl of Huntington (c. 1598) chose the earldom of Huntingdon for their hero, the specific choice of title was in all probability no more than a joke – these are tragedies with a substantial dose of silliness: Huntingdon, everybody knew, was something to do with hunting and therefore a fit earldom for an outlaw whose CV included extensive experience in the discipline of poaching. It is, in particular, quite unlikely that the choice was in any way suggested by that earldom's having belonged to the Scottish kings three-hundred and sixty odd years earlier, and the seemingly corroborative circumstance that Barnsdale in Rutland had belonged to the crown of Scotland is in fact entirely irrelevant, for that locality is not the setting for the Huntington plays, and in any case it was not known as 'Barnsdale' until a few decades before Munday and Chettle got into the drama writing business.

Huntingdonshire's flag may include a bugle, but according to the standard work on Huntingdonshire place-names, though it is not impossible that the etymology of the name could be "hunter's hill", this "is not on the whole very probable [...] It is more likely that the well-recorded OE pers. name Hunta, which survived into the 12th cent., is contained here". The referent of the element "dun in Huntingdon must be the stretch of rising ground between the Ouse and the valley in which King's and Abbot's Ripton lie".[1]