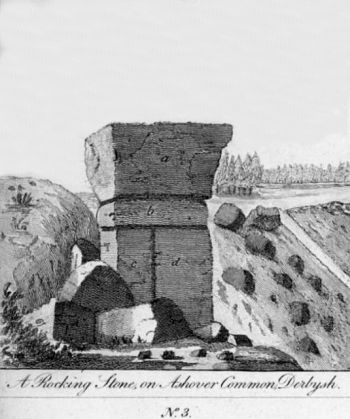 This natural stone feature is located c. 200 m south of the Turning Stone and somewhere north of Cocking Tor. Hayman Rooke, who was the first to mention Robin Hood's Mark, gave this account of it in 1794 (published in 1796):

There is in the Peak of Derbyshire a very remarkable rocking stone, called by the country people Robin Hood's Mark; it stands on the edge of a declivity near the top of a hill on Ashover common, looking down upon Overton hall, an estate of Sir Joseph Banks, Bart. the respectable President of the Royal Society, who will undoubtedly preserve this curious Druidical monument.

Fig. 1. plate V. represents the South view of this rocking stone, which, from its extraordinary position, evidently appears not only to have been the work of art, but to have been placed with great ingenuity; the two upper stones (a and b) have been shaped to fit exactly with the two upright stones (c and d) on which they rest; and so artfully contrived, that the lower stone (b) moves with the upper stone (a). It measures about 26 feet in circumference.

That this is a Druidical monument formed by art, cannot, I think, be denied; we are assured that the Druids were well skilled in the art of magic, by which the superstitious Britons were led implicitly to believe in the miracles performed by these rocking stones.[1]

The figure referred to can be seen elsewhere on this page. In regarding Robin Hood's Mark as a 'Druidical monument', Colonel Rooke was very much a child of his time. His account of the Mark was frequently quoted by compilers of directories, tourist guides etc.[2] Around 1800 there apparently existed a tradition to the effect that Robin Hood and Little John each shot an arrow from Eastwood Rocks near Ashover to Robin Hood's Stride near Harthill, c. 13.5 km to the west. While Little John hit the target, Robin Hood's arrow fell in the valley below the rocks. An IRHB user named Chris has suggested that Robin Hood's Mark, rather than the much more distant Stride was the intended target. While this is possible, it must be noted that imagination knows no bounds and the relatively short distane of c. 2 km to the Mark is in keeping with Robin Hood's shot being a failed one, while Little John's was perfect.

The coordinate cited in the infobox is as given at the Modern Antiquarian website.[3] It is uncertain if this is correct. On Google Maps satellite view (see image gallery below) several outcrops are visible in the vicinity, yet at the point indicated nothing except trees are to be seen, but then as a local historian noted in 1996, the 'two rock pedestals traditionally called the Turning Stone and Robin Hood's Mark' are '[b]uried in dense woodland'.[4]

While much of the area is evidently also overgrown with rhododendrons, a few contributors to the Modern Antiquarian have managed to locate the stones and take a photo of them. One offers this helpful comment: 'Robin Hoods Mark is due south of the Turning Stone, on it's own, between the outcrops of Overton Tor and Cocking Tor. It has been wedged to prevent it from rocking. The Turning Stone never was a rocking stone'.[3]

A selection of 19th cent. Gazetteers etc. which briefly mention Robin Hood's Mark, based on Hayman Rooke's account cited above.