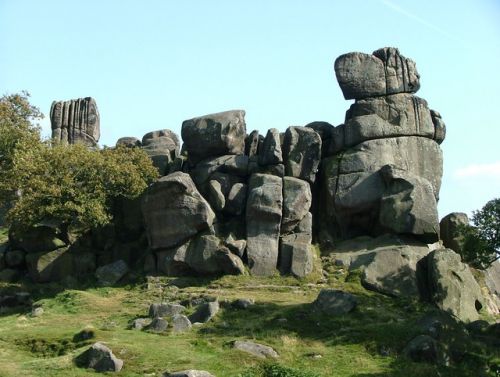 Robin Hood's Stride is the name of a formation of broken gritstone rocks on Hartle Moor close to the village of Elton. There is a pinnacle at either end of the formation, that to the west being known as the Weasel pinnacle and that to the east as the Inaccessible pinnacle.[1] The formation is said to owe its name to the belief that the distance between the two pinnacles was equal to the length of Robin Hood's step or stride.[2] The alternative name of Mock Beggar's Hall is probably due to the general resemblance of the entire formation to a hall (manor house) with each pinnacle as a 'chimney' at either end of the 'building'. One of two fairly early drawings of Robin Hood's Stride, dated respectively 1794 and 1804, is accompanied by a note about a tradition relating to Robin Hood (see Allusions below). However, the note does not actually include the name 'Robin Hood's Stride', though it may be included in the title of the drawing, if it has one. Until this has been verified, the 1817 allusion cited below must be considered the earliest certain source for the name.[3]

The note to the drawing just mentioned concerns a tradition that Robin Hood and Little John each shot an arrow from Eastwood Rocks (Ashover), one of which landed at Robin Hood's Stride. Similar traditions are connected with several ofther pairs of locailties. See the page on Places connected by bowshot.

As Kenneth Cameron notes in one of the English Place-Name Society volumes on Derbyshire, this and all other Robin Hood-related place-names in Derbyshire are first recorded at a late date.[4]

Robin Hood's Stride is a popular tourist attraction which has almost certainly been visited by more climbers than outlaws.

The tradition of the neighbourhood is, that Robin Hood and Little John stood upon Eastwood Rocks, about 1½ miles off, and shot at this stone [i.e. Robin Hood's Stride, Harthill]:—Little John's hit it, but Robin Hood's fell short of it in the valley below.[5]

The scenery of the gritstone district is by no means beautiful or agreeable, except in the valleys above noticed [i.e. 'Matlock Dale, Monsal Dale, Middleton Dale, Eyam Dale, and Dove Dale']; it consists chiefly of dreary moors, on some parts of which large masses and groups of rock are seen projecting on the surface, some of them in very grotesque forms. The most remarkable of these groups of gritstone rock are, those on Stanton-Moor, called Robinhood's stride, or Mock-beggar hall, and Rowtor rocks.[6]

An unfrequented path of another quarter of a mile led us to the base of Mock Beggar Hall, a curious assemblage of sand-stone rocks thrown confusedly together, yet so arranged as to form at a distance a strong resemblance to a regular building, with a huge chimney at each extremity; hence the name which this mass of rocks has obtained: the stony towers at each end are called Robin Hood's Stride.[7]