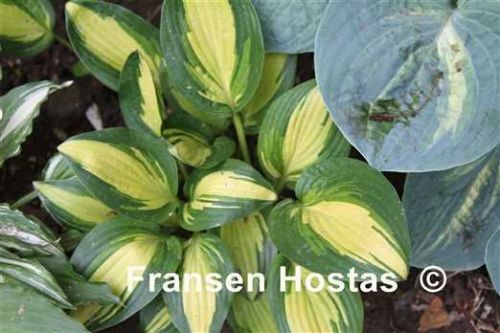 Introduced in 2002, the hosta cultivar 'Merry Men' was hybridized by Jim Schwartz. It is one of a series of cultivars with names inspired by the address of his business: 11676 Robin Hood Drive (Dubuque), Iowa.[1] For 'Robin Hood' et al., see 'Also see' section below. Jim's Hostas is now owned by Uniquely Hostas.

'Merry Men' is a small cultivar, 15 to 25 cm in height, which thrives in varying degrees of shade.[2] Its leaves have creamy white center with medium green margin and streaks to the center.[3] Its pale purple flowers bloom on reddish purple scapes in July.[4]

I have not been able to establish from which of the 24 accepted species the 'Merry Men' variety was bred, but perhaps this is a moot point since the species are easily interbred.[5] See the entry on Hosta Robin Hood for information on hostas in general.