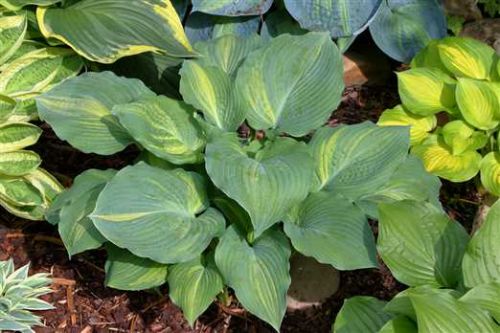 Introduced in 2002, the hosta cultivar 'Sir RIchard' was hybridized by Jim Schwartz. Named after Robin Hood's friend, Sir Richard at the Lea, who first figures in the Gest of Robyn Hode, it is one of a series of cultivars with names inspired by the address of his business: 11676 Robin Hood Drive (Dubuque), Iowa.[1] For 'Robin Hood' et al., see 'Also see' section below. 'Sir Richard' is a medium-sized hosta which likes half or full shade,[2] where it can reach a height of c. 70 cm and a diameter of 60-90 cm.[3] Its slightly rippled leaves are medium green with creamy white streaks.

I have not been able to establish from which of the 24 accepted species the 'Sir Richard' variety was bred, but perhaps this is a moot point since the species are easily interbred.[4] See the entry on Hosta Robin Hood for information on hostas in general. Jim's Hostas is now owned by Uniquely Hostas.