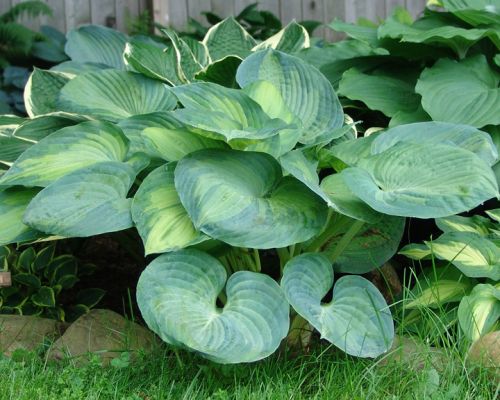 First marketed in 2000, the hosta cultivar 'Robin Hood' was hybridized by Jim Schwartz. It's name was inspired by the address of his business: 11676 Robin Hood Drive (Dubuque), Iowa.[1] This variety is one of several with Robin Hood-related names introduced by Schwartz (see 'Also see' section below). 'Robin Hood', a medium-sized hosta with flowers that are nearly white and leaves that are heart-shaped to round and light green with a dark green margin, reaches a height of 40 to 50 cm. Jim's Hostas is now owned by Uniquely Hostas.

Hosta, also known as Funkia, a genus of herbaceous perennials commonly known as hostas, plantain lilies (particularly in Britain) and occasionally by the Japanese name giboshi, are widely cultivated shade-tolerant foliage plants. Currently placed in the family Asparagaceae, subfamily Agavoideae, the genus is native to northeast Asia (China, Japan, Korea, and the Russian Far East). It was named by Austrian botanist Leopold Trattinnick in 1812 in honor of the Austrian botanist Nicholas Thomas Host. In 1817, German botanist Kurt Sprengel introduced the generic name Funkia in honour of Heinrich Funk, a collector of ferns and alpines. As of October 2014, there were 24 accepted species. In the West, hostas are usually grown as garden plants, for purely ornamental purposes, but all species of hosta are edible and are commonly grown as vegetables in some Asian cultures. However, hostas induce vomiting and diarrhea in dogs, cats, and horses due to the saponins contained in the plant. Symptoms include vomiting and diarrhea.[2] I have not been able to establish from which species Robin Hood is derived, but perhaps this is a moot point since the species are easily interbred.[2] In all events, at a pinch Robin Hood can go into the stew; just down feed it to quadrupeds.