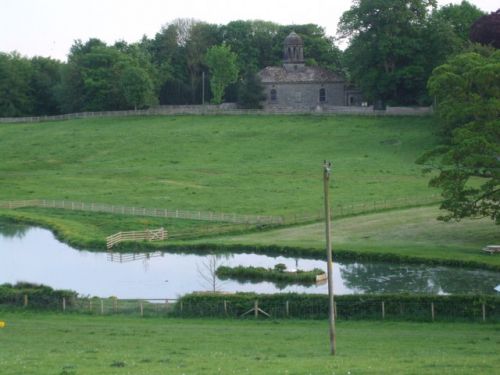 View towards All Saints Church, Brandsby / Glyn Drury, 22 May 2010, Creative Commons, via Geograph.

[1615:]
[At Archbishop of York's Visitation Court, George Pearson was presented] for playing the sheriff at a rush bearing upon St Lawrence day last being Sunday [...] [and George Sherwin for] playing Robin Hood at the said rush [p. 476:] bearing upon the sabbath day[1]

St Lawrence's Day is August 10.[2] George Pearson, who played the sheriff, was a c. 40 year old labourer. He was a recusant (officially recognized as such by 1611) and a servant of Richard Cholmeley, esq., of Brandsby, who was also a known recusant. George Sherwin, who played the part of Robin Hood, was around 35 at the time; his wife was a Catholic, and he would later be employed by the Colmeleys. Given these associations he likely had Catholic leanings.[3]

As Keenan argues, it is possible that the motivation for reporting Pearson and Sherwin, an acknowledged and a possibly suspected recusant, to the church authorities was not only their being sabbath breakers and possibly performing the play on church grounds; it may have been motivated also by concerns about their motives for performing it, and perhaps the "contents" of their performance were considered subversive. There is, however, no evidence beyond their recusancy to support this.[4] As Keenan also notes, performing as Robin Hood at a local festival did not necessarily involve actual play acting; sometimes it meant heading a procession and a quete.

Perhaps the reason the Robin Hood play at Brandsby is supposed to have taken place within church grounds – which would have been considered an aggravating circumstance – is simply that the occasion was a rushbearing. At a rushbearing, a custom common in north-western England from late Medieval times to the early 19th century (and later revived in some places), rushes were gathered and carried to the parish church and strewn on its (then) earthen floor as "a form of renewable floor covering for cleanliness and insulation".[5] Rushes woven with flowers were hung on the inside walls of the church. These proceedings tended to be followed by a church ale.[6] The church thus was the focus for much of the activity, but as the festival involved a festive procession as a central event, we cannot be certain whether entertainments in connection with it took place at/in the church or somewhere else. Robin Hood entertainments very often took place in connection with a church ale, which was often held in the church house, a communally owned building used for such purposes. I do not know whether Brandsby had a church house at this (or any other) time.