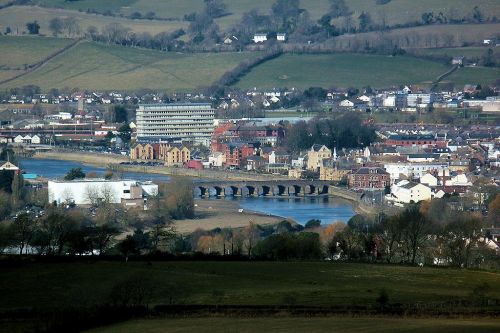 This entry occurs in the Receivers' Account Roll, under the heading of 'Allowances'.
Wasson (1986), p. xxv, notes the relative abundance of Robin Hood entries in Devon records, but warns against assuming the events in question were all of a dramatic nature, noting that the chief tasks of the persons elected Robin Hood and Little John were to collect money for the parish and frequently to serve as ale wardens; in most cases the records are not explicit as to the nature of the events.
Wasson (1986), p. lxii: entries relating to church ales are found during the period 1526 to 1559.

Accounts from Barnstaple include many payments to the minstrels (often musicians) of noblemen and royalty, for instance at Christmas, Hocktide, and Midsummer Eve. There are payments to/for tumblers, bear wards, bull baiting, unspecified players, actors, jesters, players and singers in the church, players of an interlude, dancers, the Midsummer watch, town waits etc.[2] The churchwardens' accounts of St Peter's, Barnstaple, for this year include a payment "for brewyng of the Churche ale And a reward geven to Anne Plym the brewster",[3]. Occasionally one finds that the ale brewed for the benefit of the parish was simply sold to parishioners for private consumption without any fête being arranged, but even if the "Churche ale" here does in fact refer to a communal event, there is no reason to connect it with the Robin Hood entertainment. The church ale was a parish affair, whereas Robart Hode's entertainment was paid for by the municipality.