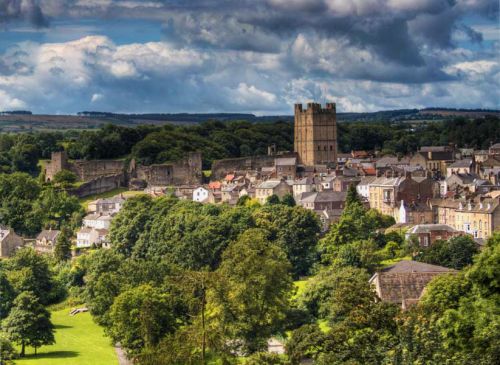 [1660:]
[...] "an account of the May Game," as performed at Richmond, Yorkshire, on the 29th of May 1660, by the inhabitants of that borough, whereby they demonstrated their universal joy and satisfaction for the happy return of King Charles II. whom God was pleased to make the instrument of delivering this nation from tyranny, usurpation, and the dismal effects of a civil war: taken from the copy of a letter from one in the country to a friend in London [...] "—They came into the town in a solemn equipage, as follows:
1. Three anticks before them with bagpipes.
2. The representative of a Lord, attended with trumpets, four pages, as many footmen, fifty attendants all suited as became persons of this quality.
3. The Bishop of Hereford, with four pages and footmen, his chaplain, and twenty other household officers, besides their attendants.
4. Two companies of morrice dancers, who acted their parts to the satisfaction of all spectators.
6. Sixty nymphs, with music before them, following Diana; they were all richly adorned in white and gorgious apparell, with pages and footmen attending them.
7. Three companies of footmen with Captain and other Officers in great magnificence.
8. Robin Hood in scarlet, with forty bowmen, all clad in Lincoln green.– Thus they marched into the town.
They marched decently in good order round the market cross; and came to the church, where they offered their cordial prayers for our most gracious soveraign, a sermon being preached at that time.
From thence my lord invited all his attendants to his own house to dinner. The Rev. Bpp. did the same to all his attendants, inviting the minister and other persons to his own house, where they were sumptuously entertained.
The soldiers marched up to the cross, where they gave many vollies of shot, with push of pike, and other martial feats.
There was erected a scaffold and bowers, where the morrice dancers and nymphs acted their parts, many thousands of spectators being come out of the country and villages adjacent. Two days were spent in acting Robin Hood, the Sheriff and the Rev. Bpp. who on his own proper charge sent bottles of sack to several officers acting in the play, who performed their parts to the general satisfaction of all spectators, with acclamations of joy for the safe arrival of his sacred Majesty. Something might be expected of the chief magistrates of the town; they permitted the conduit to run water all the while.
The preceding rejoicings were performed by the commonalty of this borough. We had also a tryal before the high court of justice this morning, where was present the judge, and plaintiff, defendant, receiver, witnesses, and umpire. After hearing the whole matter in controversies and disputes, the defendant and witnesses terminated the business in a pitched field with such weapons as the place afforded."[1]

As far as I am aware this account has not been cited or discussed since 1812. It would have been nice to have more information about the letter on which it is based. The Bishop of Hereford may have been a character similar to the Abbot of Misrule. His presence could also have been suggested by the ballad of Robin Hood and the Bishop of Hereford, but as he is mentioned as the third character in the procession while Robin Hood is the eighth, the two do not seem to have been connected.[2]