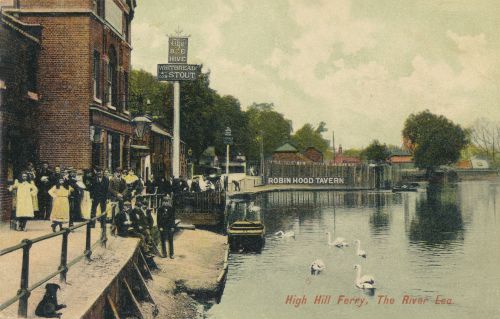 First mentioned in 1794, the Robin Hood Tavern at High Hill Ferry, Upper Clapton, closed in 2001, when its precincts were demolished. An 1851 trade directory and the 1861 census list it as the Ferry House. In the 19th century, the pub had its own fishery and the publican also operated the Robin Hood Ferry across the Lea.[1] Information on publicans from the period 1794–1944 culled from Proceedings of the Old Bailey, trade and Post Office directories, census records etc. can be found at Pub History.[2]

According to the latter website, the pub was "[o]riginally at Robin Hood Hill, then at High Hill Ferry, Upper Clapton by 1896".[3] No source is cited for this, and it must be noted that right from the first reference in the Proceedings of the Old Bailey (1794) – which is also the earliest known to UK Pub Hisory – the pub was located at High Hill Ferry. Unless "Robin Hood Hill" is simply a mistake, it may have been an alternative name for High Hill Ferry, but I have seen no record evidence for this.

The area where the pub stood now forms part of the Robin Hood Community Garden.

[16 Jul. 1794:]
[...] CHARLES PRITCHARD and JOSEPH SMITH were indicted for stealing, on the 6th of July, eighteen guineas, a half guinea, two hundred shillings, three hundred and twelve copper halfpence, and ninety-six copper farthings; the goods and monies of Charles Turner, in his dwelling house.

The case opened by Mr. Knowlys.

I was the waiter at the Robin Hood at the time of this happening; Mr. Charles Turner keeps that house; this happened on Sunday the 6th of July, to the best of my knowledge, between eight and nine o'clock; I have no perfect knowledge of the prisoners; I saw them that day, they came up stairs, and ordered a jug of ale, there were three in company, they came into the public tap room up stairs. The Robin Hood is at High Hill Ferry, Clapton, near Hackney.

Q. Do you know where the gentleman and three ladies went to? — No, I never saw them afterwards. Pritchard met me at the bottom of the stairs, and said, you are wanted up stairs, waiter; they want some more ale; with that I went up; they found fault with the ale, and desired to have some milder if there was any; and I brought them up a jug of milder.

Q. Who was the person who asked for the milder? — I believe it was Mr. Smith, but I don't know exactly recollect.

Q. Who were in the room when you went up in consequence of Pritchard's direction? — There were no others in the room then, then these two; the man who is absent, and Mr. Smith. When I brought up the milder ale, Mr. Smith he did not find it better than the last; but Pritchard he tasted it and thought it was very good. After that I went down stairs and walked about the garden, and I came up again about some things that were to be carried down, and I found that one of them was absent from the room

I am sole master of the Robin Hood. On Sunday the 6th of July, I lost thirty pounds sixteen shillings, in gold and silver, and halfpence; eighteen guineas and a half in a silk purse, in gold; the silver was in a canvas bag, and fifteen shillings of halfpence, tied up in five shilling parcels.

Q. How far was this from the Robin Hood? — I cannot say that, three or four fields, better than a quarter of a mile. Hearing the cry of stop thieves from several voices, when I got into the lane I see several people running up this lane, and still crying stop thief! I concluded they might be drinking or joking; I said, are you joking or in earnest in calling out stop thief? the answer was, sir, we are in earnest, they have robbed my master's house. Immediately these two prisoners jumped out of the ditch, went through the fence, and ran into the corn field; one of them, Pritchard, attempted to pass me, and I said, you cannot pass me, I must secure you till the people come up; sir, says he, I am no thief, don't touch me; says I, if you are no thief, why don't you stand? after some little altercation I endeavoured to lay hold of him, I secured him, and in the course of three or four minutes some of the pursuers came up, Davis came up and said, that is one of the men; and I said, there he is for you; and he was taken back to the Robin Hood.

I am a labouring man; I found one key last Monday was a week, in the morning, the Monday after this robbery was committed; it is a double key; this is it; I found it in the horse road, pretty near the Robin Hood , about twenty-eight or twenty-nine yards; directly as I picked it up Mr. Turner's man was rolling a walk in the garden, I gave it him; Mr. Turner had it that morning; I see Mr. Turner have it afterwards.

Q. What is the name of the road? - It is a little bit of a lane that leads from the Robin Hood, into the fields, into Clapton.

Mr. Knapp. Whereabouts in the road did you find it? — Next the hedge by the side of the road.

Q. What is there on the other side of the hedge? — Gardens.

Court to Davis. What do you call this lane? — It is a coach road that leads up to Clapton.

Q. Is there a garden by the side of that road? — Yes, a garden belonging to my master.

Q. Which way did he throw the keys from him? — By the left hand side.

Q. Is there any garden on the left hand side going from the Robin Hood? — Yes, there is.

Q. How is that garden separated from the lane? — By an hedge and ditch.

Q. To Perry. Which side of the road was it you found the key? — The left hand side going from the Robin Hood.

Mr. Knapp to Davis. The pick lock keys were thrown by the man that escaped? — Yes.

Court to Turner. What do you call the parish? — St. John's, Hackney.

WILLIAM GARRAND. I keep the Robin Hood, at Upper Clapton. The prisoner used to be about our house to assist my wife. I had missed a great deal of money out of my till. The prisoner slept three or four nights in my house, and the rest she used to sleep with her parents. In consequence of missing so much money, I marked some with G's and some with W's. We can't keep our till locked always. I left my bar in about an hour and a half, and left my wife at home. I had locked my bar. When I returned, I asked her for the key. When I opened the bar, I missed a three-shilling token and some halfpence. I then fetched an officer, and when he came, I charged the prisoner with having the money, and she said she had none. She did not serve in the bar. She was searched in my presence, and a three-shilling Bank token, a shilling, and a sixpence, all marked were found on her. She also had some half-pence which were marked. The shilling and the six-pence were both marked with a W. The three-shilling token was marked with a G.

Fined 1s. and delivered to her friends.

EDWARD INKERSLEY. I lost three garden hand-glasses about the 13th or 14th of March, from my garden, which is about a quarter of a mile from my house. This man had been employed in a garden at the end of mine, which was divided from it by a fence. I afterwards found them at Clapton, and knew them by a mark upon them — they were in the possession of George Garret. The prisoner was taken in Spa-fields.

GEORGE GARRET. I am a victualler, and live at the Robinhood, public-house, High-hill-ferry, Clapton. I believe the prisoner brought me the glasses — I had seen him once before; I cannot be positive as to his person. There were four glasses brought to me.

WILLIAM WAINWRIGHT. I took the prisoner into custody on the 24th of April — I did not then know of this charge. As I was taking him to Clerkenwell he said he had a letter written to him, and he took the glasses with the letter.

Prisoner's Defence. A man came to me in Ray-street, Clerkenwell, and asked me to go with him and sell the glasses.

[1 Jan. 1844:]
[...] JAMES WICKENDEN. I live at the Robin Hood, High Hill Ferry. On Sunday evening, the 10th of Dec, I saw the prisoners together in my master's tap-room, for about an hour and a half—I did not see any bundle—they had a dog—the prosecutor's field is about two hundred yards from our house.[7]

[19 Sep. 1864:]
[...] SARAH AMELIA POWER. I am ten years old, and live with my parents, who keep the Robin Hood public-house, High-hill Ferry—on a Wednesday in August, between half-past 12 and 1 o'clock, the prisoner came in, and asked for half a quartern of gin, which came to 2 1/2d.—he gave me a half-crown—I took it to my mother, who bit it, and put it on the counter—my father took it up, and spoke to the prisoner—the gin was in a bottle, and I took it off the counter.

THOMAS POWER. I am the father of the last witness, and keep the Robin Hood public-house—on 10th August, about half-past 1, I saw my daughter serve the prisoner—he put down a half-crown—she looked at it, and took it to her mother, who bit it, and brought it to me—I took the bottle of gin from the prisoner, and asked him where he got the half-crown—he said that he earned it at shoe-blacking, and got a young chap to give him half a crown for two and sixpence [...][8]