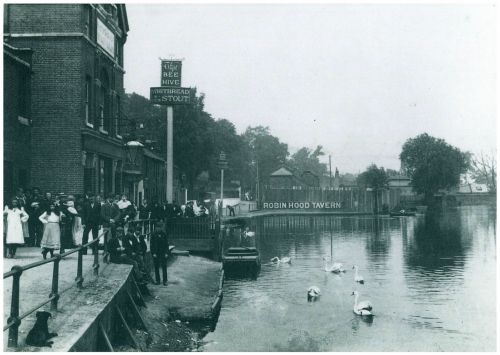 A ferry across the Lea was named after Robin Hood as early as 1810. At some point in the 19th century the ferry came to be operated by the publican at the Robin Hood Tavern at High Hill Ferry.[1] The ferry, which took people from Leyton to Clapton, ceased operating after WWII.[2]

While the reference to Robin Hood Ferry in the 1810 Old Bailey case summary (see Records below) most probably concerns the general area rather than the ferry itself, it clearly implies that the ferry was then named after Robin Hood.

JAMES CROOKS. I am a hackney coachman; on the 12th of February I had a fare to Clapton, on my coming home near one o'clock in the morning, I had the misfortune to overturn my coach, it was dark, I got out of the road into a ditch by the side of a brick field, I got the prisoner to assist me, he could not help me himself, he went and got another man, he came with another watchman and helped me with the horses; I was obliged to leave the coach till day light, I left the great coat on the coach, it was a bye road, I thought it would be safe till morning, the prisoner went with me, and helped put the horses into the stable. I went to the coach again as it was day light in the morning, and the coat was gone, I did not see the coat again untill I saw it at Worship street on the Wednesday.

Q. What is your coat worth.—A. Fourteen shillings.

Q. Was the prisoner a watchman.—A. Yes; he was the first watchman that I called to my assistance.

JAMES GRIFFITH. I am a constable of Hackney; the prisoner was a labouring man and a watchman occasionally, he was on duty that night; I was informed by the other watchman, that the man had lost his coat, he was suspicious that the prisoner had got it, I apprehended him about two o'clock on the Monday, he told me, he had got the coat at home in the closet, I sent the other watchman for the coat.

JOHN SMITH. I am a watchman; I went to the prisoner's house, the wife took the coat out of the closet, and gave it to me.

Prisoner's Defence. On the night mentioned in the indictment, John Crook my prosecutor came along with the coach very much intoxicated; he asked me the way to Balls-pond, I directed him, instead of which he drove towards Robin-Hood Ferry, his coach was plunged into a pit, and from my feeble strength and old age, I could not relieve or ease the horses, therefore I went for another watchman for assistance; we extricated the horses who was lodged for the night at an adjoining house, the coach was obliged to be left till the next morning. The great coat I did not find for two hours afterwards, and I did not imagine that it belonged to the prosecutor, as he never mentioned its loss, the coat was wet and dirty, I found it a great way off the coach, I took it home, and to prevent the wet and dirt from communicating any damp or dirt to me, I wrapped it up in some hay, when I came home I thrust it into a hole under the stairs, in which place it remained till it was fetched away, when I was in custody, I instantly told I had it, I meaned to return it when I found an owner for it, I have lived all my life by my industry, I am very comfortable in my family, I never stole any thing for myself or them: I hope to be acquitted by the court.

The prisoner called three witnesses, who gave him a good character.