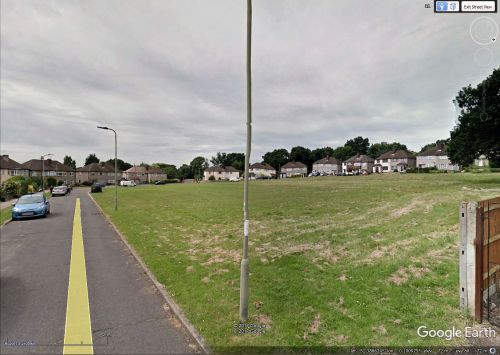 Robin Hood Shaw in St Mary Cray, a former Kent parish that is now part of the London Borough of Bromley, was a wooded area shaped roughly like a U, oriented NNE and extending from the present Poverest Road down towards the present Oakdene Road, almost as far west as present Archer Road and almost as far east as present Barnesdale Crescent.

As St Mary Cray was gradually swallowed up by the ever growing capital city – it became part of the then Orpington Urban District in 1934 and part of Greater London in 1965[1] – Robin Hood Shaw and its immediate vicinity were developed into a residential area whose street layout reflects the contours of the original wooded area, while its original name provided the inspiration for the names of most of the new streets. In terms of the number of elements, if not in terms of area, I believe this neighbourhood is the second largest planned cluster of Robin Hood-related place-names in England and quite possibly the world. See further the place-names listed on the page on the St Mary Cray place-name cluster, and see the page on Tuckswood place-name cluster for the largest group of streets with Robin Hood-themed names.

Robin Hood Shaw is still included on large-scale maps published just after WWII. Of maps published later than this, those that are available online, dating from 1946, 1957 and 1961, are all in lower scale, and this may be the reason the place-name is not included on them, but on the other hand there cannot then have been much left of the little wood that gave the area its name, and the 'shaw' has long since disappeared from maps of any scale.