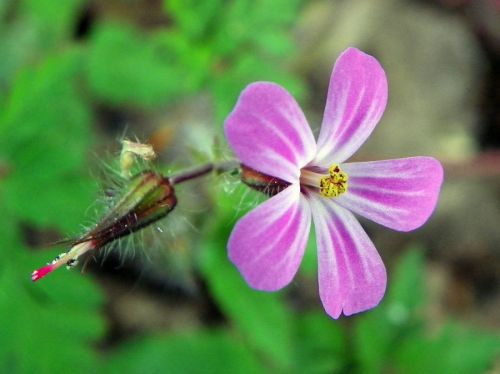 The flower of a geranium robertianum, a.k.a. 'Robin Hood' / Unknown. 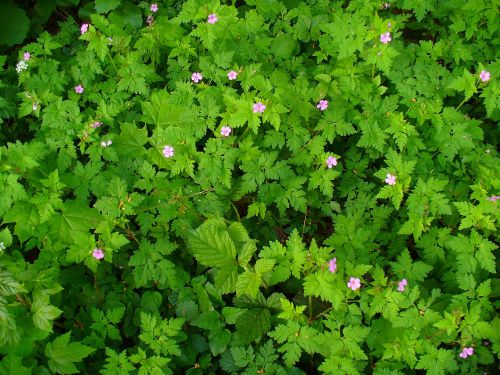 Robin Hoods, very much in the plural / 'Llez'; Creative Commons.

The author R.M. Gilchrist, writing in 1913, noted that Geranium robertianum was known by the outlaw's name in several English counties.[1] The plant, which has the alternative Latin name of Robertiella robertiana, is also known under the folk-names 'death come quickly', 'storksbill', 'dove's foot', 'crow's foot', 'Robert geranium', 'red Robin', and 'herb Robert', the latter clearly being the most common. Was it simply the element 'Robert'/'Robin' in two of the most common folk-names for this plant that led to the adoption of the alternative name of 'Robin Hood'?

Geranium robertianum is an annual or biennial plant, up to 50 cm high, that produces small pink five-petalled flowers (8-14 mm in diameter) from April to autumn. Its stems are often reddish, and its leaves also turn red at the end of the flowering season. It is common throughout Britain and Ireland in woodland, hedgerows, scree and in shingle-covered coastal areas. Western Europe, from north Mediterranean coasts to the Baltic, is its chief area of distribution.

Herb Robert was used traditionally as a remedy for toothaches and nosebleeds and for healing wounds. Crushed, fresh leaves of the plant, which smell like burning rubber tires, are said to repel mosquitoes when rubbed on body or limbs. Active ingredients include tannins, geraniin and essential oils. Parts of the plant were carried near the body to attract good luck and also because the similarity of its reddish stalks to the legs of a stork led to the belief that it enhanced fertility.