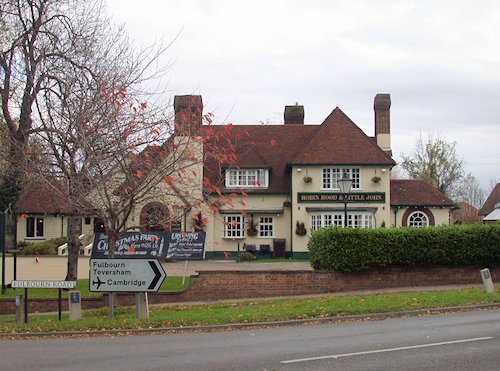 The Robin Hood in Cherry Hinton is an old pub. The first notice I have so far found of it is a reply to a query regarding 'Poetical Tavern Signs' in Notes & Queries in April 1854, where a P.J.F. Gantillon notes that "The Robin Hood inscription is found, with a very little variation, in front of a public-house at Cherryhinton [sic], at the corner of the road to Fulbourn [...]".[1] The type of inscription Gantillon has in mind is exemplified by this one from Castleton near Whitby:

The original building, a thatched cottage, was demolished in 1960 or earlier and replaced by the present building, at which time the establishment was given the name Robin Hood & Little John, which it retained as late as November 2007. Subsequently the name has been changed to the Robin Hood. The pub is owned by Greene King Brewing and Retailing Limited. Across the street is a park with a pool known, inter alia, as Robin Hood Dip, a name which it presumably owes to its proximity to the pub.

[...] the original public house [...] was an extended thatched cottage. This was later demolished, and by 1960 the present building was reopened as the Robin Hood and Little John pub.[4]

Sarsen stone about 1 metre across in car park of Robin Hood & Little John pub. 'Footprint' mark embedded into it, some say possibly carved.[5]