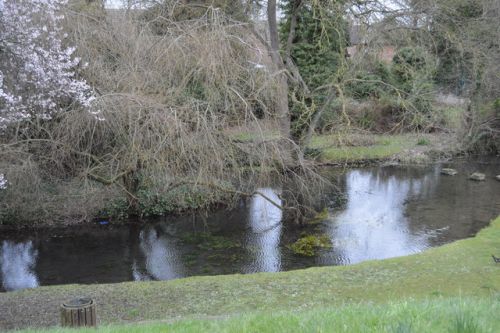 Robin Hood Dip a.k.a. the Spring a.k.a. Springhead, with the islet known as the Giant's Grave / N. Chadwyck, 19 Feb. 2016, Creative Commons, via Geograph.

Robin Hood Dip is a local name for a pool in a park across the High Street from a pub known since c. 1960 as Robin Hood & Little John but more recently renamed the Robin Hood. Presumably it was the proximity to the pub that inspired the name Robin Hood Dip, which would therefore have arisen c. 1960 or later. In the 'dip' is a tiny island called the Giant's Grave. It is thought that the giant in question was Gogmagog. Robin Hood Dip is also known locally as the Springhead or the Spring. In the 19th century, this natural well supplied water to the city of Cambridge. Of a small bridge which then led to the island only two large stones now remain.

The island in the pool [...] is locally known as Giant's Grave, it is thought after the giant Gogmagog, which legend says lived nearby, but the name may also have come from some Iron Age burials which were unearthed locally on Lime Kiln Hill, where the skeletons were unusually tall (Cherry Hinton Chronicle, 1854) This 'Giant's Grave' site is also locally known as 'The Spring' or 'Springhead' or 'Robin Hood dip'. It has been given to the local people as a public park since 1941. There used to be watercress growing in the spring[1]