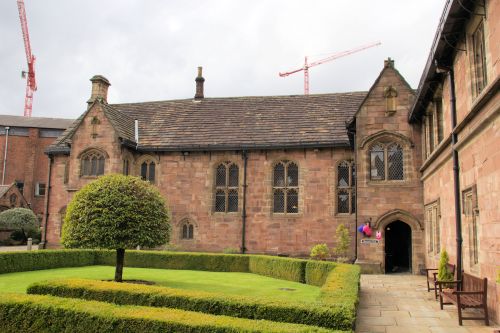 Until the mid-19th century, Chetham's Library included a veritable cabinet of curiosities, among whose highlights – as they must seem to us – were several 'arrows [that] once belonged to Robin Hood'. Some time before 1866 most of this assortment of knick knack was gifted to Salford Museum and Art Gallery, which opened in 1850.[1] This new cultural institution cannot have been too happy with its mass-acquisition, for the collection was further disbanded, and the present whereabouts of many objects are unknown.[2] For more about the collection, see the page on 1827 - Gregson, J S - Museum Chethamiense.

It was one of the duties of the 'blue-coat' boys from the 'Hospital', a charity school founded in tandem with Chetham's library, to act as cicerones to visitors when summoned by a bell. This they apparently did by rattling off a memorized list of objects on display, an 'oral catalogue' to which they sometimes made extemporized additions, retroactively foisting humdrum items in the collection on Oliver Cromwell, Elizabeth I, Robin Hood or whomever they thought might add a little lustre to the overly mundane. One can almost hear their schoolboy laughter. A researcher at the library includes Robin Hood's arrows among the objects possibly given such a fictitious provenance, and presumably this indicates that she has found no evidence they had been bequeathed to the library accompanied by a note of their having belonged to the famous outlaw.

The library was still receiving curios in 1838,[3] and by coincidence a set of alleged Robin Hood's arrows previously displayed to customers at Robin Hood's Well (Nottingham) are said to have been auctioned off in 1827 – the very year in which the Oral Catalogue of the collection of objects at Chetham's Library was perpetuated in print – to a Lionel Raynor, an actor on the London stage, who seems later to have been intent on finding a home for his little collection before migrating to America. However, if the latter story is correct, these arrows could not have found their way to Manchester soon enough to be the ones referred to in the catalogue.

(Enter boy and boobies).
Boy—That's th' skeleton of a man—that's a globe—that's a telescope—that's a snake—over the snake's back's two watch-bills—those are four ancient swords—that with a white haft once belonged to General Wolfe—that's the whip that the snake was kilt with—that topmost's a crocodile—that bottomost's an alligator—that boot once belonged to Queen Elizabeth—that's an Indian pouch—that's an ancient stiletto—that's part of Humphrey Chetham's armour—that with the white face is a monkey—side of the monkey's a green lizard—side of the lizard's a turtle—those bows and arrows belonged to th' Indians—that's a porpus's head—those are various kinds of adders, worms, snakes, fishes, and venomous creatures—those are a pair of eagle's claws—that arrow belonged to one of the legions that fought under the Duke of Richmond at Bosworth Field, in the year 1485, when King Richard the 3rd, King of England, was slain—those arrows once belonged to Robin Hood—that's a sea hen—that's a sea weed—that's a unicorn fish—that's part of an Indian's skull—that's th' top part of it—that's part of Oliver Cromwell's stone tankard—those balls are took out of a cow—that's part of a loadstone—those two pieces of wood was almanacks before printing was found out—that's a hairy man—under the hairy man's a speaking trumpet—side o' th' speaking trumpet's Oliver Cromwell's sword—that's a leathern bag—side of th' leather bag's two cokey [p. 37:] nut shells—side o' th' porpus's skull's a pumpkin—side o' th' pumpkin's an American Cat—over th' pumpkin's a turtle—side o' th' turtle's a sea weed—that top one's a crocodile—under the crocodile's an alligator—under the alligator's a woman's clog that was split by a thunderbolt, an' hoo wasn't hurt—side o' th' crocodile's a sea hen—side o' th' sea hen's a Laplander's snow shoe—that in the box is the skeleton of a nightingale—that table has as many pieces as th' days in a year—this clock only strikes once a year—that's cock that crows when it smells roast beef—and that's th' way out."[4]