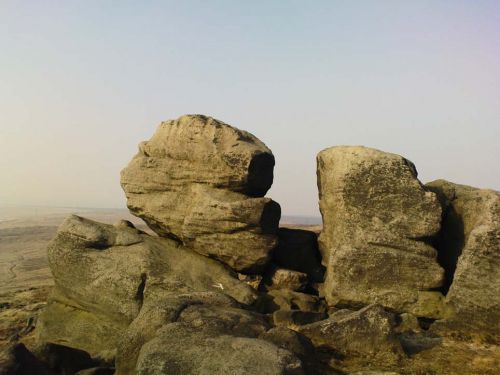 Robin Hood's Bed is a "name applied to whole or part of the prominent ridge of Blackstone Edge in the Pennines". Neolithic flints have been found at the site.[1]

While the name is sometimes applied to the entire ridge, there is no doubt that, as noted on Northern Antiquary's informative page on this locality, what suggested the name is a rock which "overlooks the very edge of the ridge, detached from the main section, with a large and very curious nature-worn ‘bed’ on its very crown" which is c. 125 cm wide and c. 215 cm long. This "bed" has a roughly horseshoe-shaped ridge. Blackstone Edge forms a border between Lancashire and Yorkshire.

The earliest reference for the name located so far is John Watson's History and Antiquities of Halifax, published in 1775 (see Allusions below). "Robin Hood's Bed" is indicated twice on the 6" O.S. map of the area published in 1851, for the specific geological feature and for the ridge on which it is found. The later 6" O.S. maps include the name for the specific feature only.

Robin Hood is supposed to have slept in the bed and to have used this lofty location as a look-out from which he could conveniently survey the Roman road below. He also amused himself by flinging a boulder all the way to Monstone Edge, where it remains under the names of the Manstone (Man Stone) or Robin Hood's Quoit (see 1831 allusions below). Paul Bennett (Northern Antiquary) notes that the Bed is mentioned in records of the township of Rishworth in 1836.

From his [i.e. Thomas Nettleton's] observations it likewise appears, that Halifax is in the latitude of 53. 47. that [sic] the height of Blackstone-edge, at Robin-hood's-bed, is two hundred and thirty-nine yards and a quarter; that Halifax Bank bears from this 60°. from north to east; Manchester 40. 30. from south to west; Rochdale 70. 20. from south to west.[2]

The following night she watched the moon, as it rose above the huge crags, breaking the long undulating horizon of Blackstone Edge, called "Robin Hood's Bed," or "Robin Hood's chair."*


[Note] * On a bleak moor, called Monstone Edge, in this hamlet, is a huge moor-stone or outlier, which (though part of it was broken off and removed some years ago) still retains the name of Monstone. It is said to have been quoited thither by Robin Hood, from his bed on the top of Blackstone Edge, about six miles off. After striking the mote or mark aimed at, the stone bounced off a few hundred yards, and settled there. These stones, however, in all probability, if not Druidical, were landmarks, the ancient boundary of the hamlet of Healey; and, as was once customary, the marvellous story of this ancient outlaw might be told to the urchins, who accompanied the perambulators, with the addition, probably, of a few kicks and cuffs, to make them remember the spot.[3]

"Be of good cheer," said the lover; "there be troubles enow, believe me, without building them up out of our own silly fears—like boys with their snow hobgoblins, terrible enough in the twilight of fancy, but a gleam of sunshine will melt and disspiate them. Thou art sad to-night without reason. Imaginary fears are the worst to cope [p. 251:] withal; having nor shape nor substance, we cannot combat with them. 'Tis hard, indeed, fighting with shadows."
"I cannot smile to-night, Gervase; there's a mountain here—a foreboding of some deadly sort. I might as soon lift 'Robin Hood's Bed,' yonder, as remove it."
"No more of this, my dearest Grace; at least, not now. Let us enjoy this bright and sunny landscape. How sharply cut are those crags, yonder, on the sky. Blackston-edge looks almost within a stride, or at least a good stone's throw. Thou knowest the old legend of Robin Hood; how that he made yonder rocks his dormitory, and by way of amusement pitched or coited huge stones at a mark on the hill just above us, being some four or five miles from his station. It is still visible along with several stones lying near, and which are evidently from the same rock as that on which it is said he slept."
"I've hard such silly tales often. Nurse had many of these old stories wherewith to beguile us o'winter nights. She used to tell, too, about Eleanor Byron, who loved a fay or elf, and went to meet him at the fairies' chapel away yonder where Spodden gushes through its rocky cleft,—'tis a fearful story—and how she was delivered from the spell. I sometimes think on't till my very flesh creeps, and I could almost fancy that such an invisible thing is about me."
With such converse did they beguile their evening talk, ever and anon making the subject bend to the burden of their own sweet ditty of mutual unchanging love![4]

In the south of Ireland, and other places, when a murder has been committed, every person who passes the spot is under an obligation to leave a stone, and the custom being continued for an indefinite time, a considerable heap is generally raised. It once happened that a man of brutal disposition, resident in a town, wantonly slew a number of persons who passed his house singing and shouting for their amusement. The blow, which was probably not intended to kill, proved fatal; the murderer escaped the punishment of the law, but for many weeks was obliged to keep a labourer in regular, occasional employment, to remove cairns from before his door. Some provinces of Spain have a similar custom, but to take the words of the writer, the stone is there thrown on the grave. On the borders of Gallicia, says an English traveller, are found heaps of stones. Every Gallician who goes out of the province to seek work, either going or returning, throws a stone on the heap.

We thus come to a curious nutting custom of Westmorland, connected with no less personages than Robin Hood and Little John. In the neighbourhood of Orton are two heaps of stones, under which it is believed the outlaw of Sherwood Forest and his lieutenant, are buried. It was once customary for every person who went a nutting in the wood, at the south end of which these heaps are situated, to throw a stone on Robin's grave, repeating the following rhyme:

Robin Hood, Robin Hood, here lie thy bones,
Load me with nuts as I load thee with stones.

Whoever was the original of this famous outlaw, and whether he was properly Robin of the Wood, or Robin with the Hood, his name is now connected with mounds and stones innumerable in various parts of England. Lancashire has made him a giant, and [p. 131:] given him Blackstone Edge for a bed. Barrows in many places are called Robin Hood's butts. He has become a favourite ballad hero, and has been worked up with the celebration of the May festival; in Westmorland, as we see, he is the patron of nutters. And, in short, too much popularity has converted him, according to the view of critical investigators, into a myth. Near the village of Catterlen, in a retired part of the wood, is a spring called Robin Hood's well, but how it acquired the name is not now known.[5]

The following is a list of twenty-five places in the parish where, from time to time, numbers of flint implements and chippings have been found, which shows how wide spread was the area in which these early toolmakers dwelt.
Blackstone Edge [...] Robin Hood's Bed.[6]

On the top of Blackstone Edge is a large reservoir for supplying the Rochdale Canal, about half-a-mile south of which is a craggy part of the hill which is known as "Robin Hood's bed."[7]

The waters at Lymm and Taxal belong respectively to Cheshire and Derbyshire. Independently of those at Rivington, Lancashire excels both of them in the romantic lake below Blackstone Edge, well known to every pleasure-seeker as "Hollingworth." The measurement round the margin is quite two miles; hills almost completely encircle it, and, as seen from the edge, near Robin Hood's crags, so utterly is it detached from all that pertains to towns and cities as to recall the remotest wilds beyond the Tweed. Hollingworth Lake was constructed about ninety years ago with a view to steady maintenance of the Rochdale Canal. Among the hills upon the opposite or north-western side of the valley, Brown Wardle, often named in story, is conspicuous; and adorning the lofty general outline may be seen — best, perhaps, from near "Middleton Junction" — another mamelon — this one [p. 214:] believed in local story to be a haunt of the maidens of the Midsummer Night's Dream.
Looking westward from the Robin Hood pinnacles, the prospect includes the valleys of the Roch and the Spodden — the last-named stream in parts wild and wilful.[8]

Over the crest of the hill the descent is easy, and here the paving seems to have been discontinued. The Robin Hood rocks close by present remarkably fine examples of typical millstone-grit. Rising to the height of fifty feet and fantastically "weathered," on the summits there are basin-like cavities, popularly attributed, like so many other things they had no hand in, to the Druids ; but palpably referable to a far less mythical agency — the quiet action, during thousands of years, of the rain and the atmosphere.[9]

Locally much romantic rock scenery may be found at Robin Hood's Bed on Blackstone Edge, Langfield and Erringden Moors, and most notable of all that fine and time-honoured outcrop on Stansfield heights known as Bride Stones.[10]