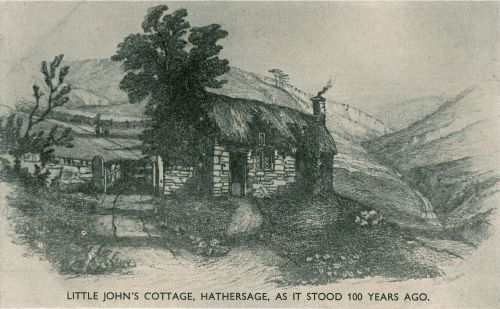 There is a local tradition in Hathersage that a cottage on the eastern side of the church was "Little John's Cottage". While other sources must and will be consulted, the following account printed on a postcard sums up the local story quite well:

A cottage which stood at the eastern side of the church well into the 19th century was always reputed to be the cottage in which Little John died. In 1847 its occupant was a woman of 70 named Jenny Shard who had the story from her father who had died 20 years before at the age of 92, and in whose family it had been handed down.[1]

Another postcard shows a black and white drawing of the cottage (reproduced elsewhere on this page), which is said to depict "Little John's Cottage, As It Stood 100 Years Ago". The latter is not very helpful since the postcard carries no date. A drawing (reproduced below) printed in an as yet unidentified Derbyshire newspaper on 5 Nov. 1922 must be based on this drawing unless they go back to a common source.