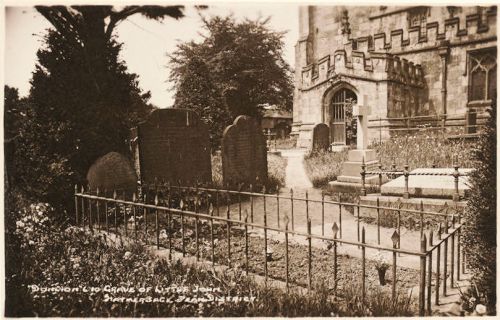 In the vicinity of Hathersage there are some excellent subjects for the pencil, and while my companion was sketching in the valley be- [p. 8:] low the village, I visited the Churchyard on the hill above, where as tradition informs us lie the bones of Little John, the favourite companion of the celebrated forest marauder, Robin Hood. His burial place is distinguished by stones placed at the head and foot of his grave; they are nearly four yards apart, and they are said to designate the stature of this gigantic man. However fabulous this account may be, the body here interred appears to have been of more than ordinary size. In October, 1784, this reputed grave of Little John was opened, when a thigh bone measuring two feet five inches was found within it. A tall man from Offerton, who on account of his stature had probably obtained the name of Robin Hood's faithful follower, was interred in this place; hence originated this village tradition; and that it might be rendered still more marvellous, when the bones were re-committed to the grave the stones that originally marked the, [sic] stature of the tall man of Offerton were removed farther apart.[2]

HATHERSAGE, a parish in the hundred of High Peak, county of Derby, 5¼ miles (N. by E.) from Stoney-Middleton, comprising the chapelries of Darwent and Stoney-Middleton, and the hamlets of Bamford, Hathersage, and Outseats, and containing 1856 inhabitants. The living is a discharged vicarage, in the archdeaconry of Derby, and diocese of Lichfield and Coventry, rated in the king’s books at £7. 0. 5., endowed with £200 private benefaction, £400 royal bounty, and £2000 parliamentary grant, and in the patronage of the Duke of Devonshire. The church, dedicated to St. Michael, is an ancient embattled structure in the later style of English architecture, consisting of a nave, side aisles, and chancel, with a lofty spire: in the chancel are several monuments of the family of Eyre, ancestors of the earls of Newburg; on an altar-tomb, represented on brass plates, are effigies of Robert Eyre, who fought in the battle of Agincourt, and of his wife and fourteen children. On the south side of the church-yard is a spot shewn as the place of interment of Little John, the favourite companion of Robin Hood: the body of a Mr. B. Ashton, who was buried here in 1725, was discovered, in 1781, quite perfect and petrified, retaining the flesh colour as when entombed. There is a place of worship for Wesleyan Methodists, and a chapel for Roman Catholics. This parish is in the honour of Tutbury, duchy of Lancaster, and within the jurisdiction of a court of pleas held at Chapel en le Frith every third Tuesday, for the recovery of debts under 40s. In 171 8 a school was erected by subscription, on a piece of land given by B. Ashton, Esq., who endowed it with £5 per annum for the schoolmaster; the premises having become dilapidated, the school has been discontinued, and the arrears of annuity amount to about £100. There are several bequests for the use of the poor. Here are manufactories for needles, buttons, and calico. The river Derwent flows through the parish. Eastward from the church is Camp Green, a circular enclosure encompassed by a single mound and moat, evidently of Danish origin. In the vicinity are some irregular rocks.[3]

1845 - White, William - General Directory of Town and Borough of Sheffield (2)

[1845:] Tradition says Little John, the famed gigantic companion of Robin Hood, 'lies buried in the church-yard [of Hathersage Church], with one stone at his head, and another at his feet,' and that his bow was hanging up in the church in 1652.[4]

We now reach Little Matlock, one of the most romantic and picturesque scenes in the neighbourhood of Sheffield, a place to which, it is said, Robin Hood and Little John used frequently to resort. At the bottom of the valley, near the bed of the river, were the tilts and forges of Messrs. Chapman, and of Mrs. Denton, and also a row of strongly-built and good-looking stone houses inhabited by the Chapmans. The grounds of Little Matlock, and the Rock Inn, lie above, on the precipitous and finely wooded declivity of a steep hill, a scene of beauty unsurpassed in the neighbourhood, and which in summer attracts thousands of visitors to enjoy the sequestered walks, to ramble among the rocks, or to descend into the beautiful valley where the river Loxley ripples and foams along in its rocky and shady bed.[5]

We'll [... p. 35:] strike round the sharp bend of the stream, and cross it, and continue along the further bank. We are on the first of the bogland now. There are patches of vivid green that yield to pressure of the foot with a spongy, gurgling subsidence. All full of little rills and rivulets the moor is, and there are wider patches of peat among the heather clumps. Half hidden underground, and fringed with fern and bog-weed, lie the three wells which go by the names of Robin Hood, Little John, and Will Scarlet. One may stop to ask how they came by their birth-names, to wonder why a man should have troubled to fashion them in this out-of-the-way spot; but neither speculation nor questioning of the moor folk brings one nearer to an answer. No house is here, nor even a shepherd's hut; yet the wells have been built for a definite use in some far-buried time. And the names? The springs are so called in old maps, and could not have been christened by any modern whose intercourse with the outer world was wider than that of the upland folk aforetime. Robin Hood one might understand, for [p. 36:] his name has long been current coin in the North; but how came Little John and Will Scarlet so glibly to the moorland tongue? Well Sherwood Forest is not so far away as the crow flies, and Hathersage, where Little John's grave is – where, by the way, the lady of quality who gave Jane Eyre her name lies buried also – Hathersage must have been joined to Haworth by a well-nigh unbroken sweep of moor. There was a wide manory about Skipton then, and as fat deer in it ever as roamed through Sherwood; Robin and his merry men found a change of scene convenient at times; and their safest route to Skipton would lie straight over the moor here, and across the valley this side of Oakworth, and on into the dale of Aire. It may well have been that Lincoln green lightened, more than once, the soberer livery of the heather; that plover and eagle screamed a fugitive defiance to the horn's challenge; that the long-bow of yew, and the merry wanderers who fitted the wild-goose feather to the shaft, were honoured guests among the ruder fathers of the moor. Ay, and men of his own kidney would honest Robin find — hard-muscled fellows who could bend a bow with the best, who held lax views as to equality of rights in feathered game and furred; for they were sportsmen ever in Haworth parish.[6]