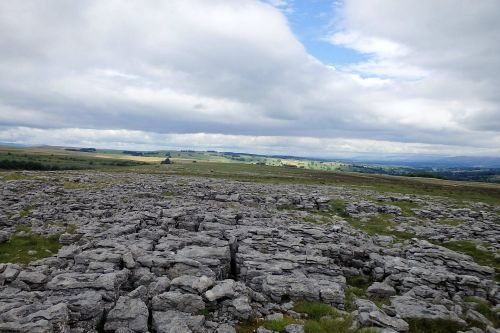 Howe Robin is a probably prehistoric site on Crosby Ravensworth Fell. A. H. Smith suggests in The Place-Names of Westmorland that the name may have been inspired by that of Robin Hood and points to a possible connection with Robin Hood's Grave, c. 650 m NNW of the Howe. The first element, 'Howe', a reflex of 'haugr', means 'hill'. The earliest record of the name known to Smith is an 1859 MS Ordnance Survey name book.[1] The allusion cited below, dated c. 1860, is thus not much later.

According to PastScape, the Howe, surveyed by archaeologists in 1996, is possibly neolithic, a roughly heart-shaped area of limestone pavement measuring 250 x 220 metres, in part encircled by the natural limestone escarpment. The surviving scarp is discontinuous, 0.8–1.5 metres high, topped in places by an earthen bank, 2.2 metres at its widest, and 0.3 metres high. There are traces of artifical ditches. Stone Age pottery and other implements as well as flakes have been found within and near the enclosure, but a neolithic date cannot be established with certainty.[2]

The word How, Danish—a hill, is generally significant of a mound, but is often applied to the whole, as Sill How, Raise How, Bousfield How, How Arcles, How Neuk and How Robin; on each of which are mounds. Raise is an older word of similar meaning, and is applied more directly to a mound, as Raise How on Bank Moor. This name is more common in the neighbourhood of Shap. Pen, of Cambro-Celtic origin, having the same meaning, is found in Penhurrock. Others again bear the ordinary name of Hill, as Iren Hill, Round Hill, &c. Though these mounds have been raised by different people each in their day, yet they are often found to have been named or rather called Hills by whatever word in the language or dialect of the succeeding races expressed the same. Others again there are bearing names peculiar to themselves, as Iren Hill, Sill How, Hollinstump, Penhurrock, Robin Hood's Grave, Lady's Mound, &c. Though they are numerous, yet many of them have been opened by the hill-breakers of the last [p. 13:] century, or been more or less ravaged for the sake of stones, earth, &c.; for this reason it is difficult to distinguish those belonging to different ages, though it is highly probable the great majority are British.[3]