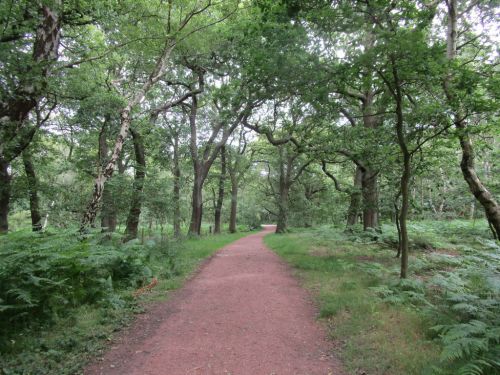 EDWINSTOWE (St. Mary), a parish, in the Hatfield Division of the hundred of Bassetlaw, county of Nottingham, 1½ mile (W. by S.) from Ollerton, containing 1992 inhabitants. This parish is situated on the road from Ollerton to Mansfield, and in that part of the forest of Sherwood which is called the Hays of Birkland and Bilhagh. This portion of the forest, according to a survey under the authority of the crown, in 1609, was found to contain 2435 forest acres; also 49,909 oak trees, which had passed their maturity, and 65,864 which were in their prime; all belonging to the crown. It is now the property of Earl Manvers, and there are about 9000 decayed oaks still remaining. Some of the trees were cut down in 1786, when, in sawing them into planks, several inscriptions were found deeply imbedded in the trunks; among these were I O—R surmounted with a crown, supposed to be the initials of Johannes Rex; I R surmounted with a crown, supposed to be those of James; SHERWd, 1575, and w and M surmounted by a crown. Some of them were nearly two feet within the trunk, and are supposed to have been inscribed in the reigns of the several sovereigns whose initials they respectively denote. The living is a vicarage, in the archdeaconry of Nottingham, and diocese of York, valued in the king's books at £14; present net income, £639: it is in the patronage of the Dean and Chapter of Lincoln, the impropriators. The church is a spacious ancient edifice, with a tower and a lofty octagonal spire ornamented with canopied niches. There are chapels of ease at Carburton, Ollerton, and Perlethorpe; and a place of worship for Wesleyan Methodists. John and Ellen Bellamy, in 1719, founded a school for the gratuitous instruction of poor children, which they endowed with lands producing at present about £12 per annum; the school, which is conducted upon Dr. Bell's plan, and open to all the children of the parish, is partly supported by subscription. The rents of some land called the poor's land, consisting of 109 acres, and producing £60 per annum, are distributed among the poor, one-half to the poor of Edwinstowe, and the other half between the poor of Budby and Clipstone. This parish contains all that remains of the ancient forest of Sherwood, so celebrated in legendary romance for the exploits of Robin Hood, who is said to have compelled Friar Tuck to solemnize the marriage of his companion Allan a Dale with a wealthy heiress in the parish church of this place. Lady M. W. Montague was born at Thoresby, in this parish.[1]

Capitals, small caps and italic text as in printed source.