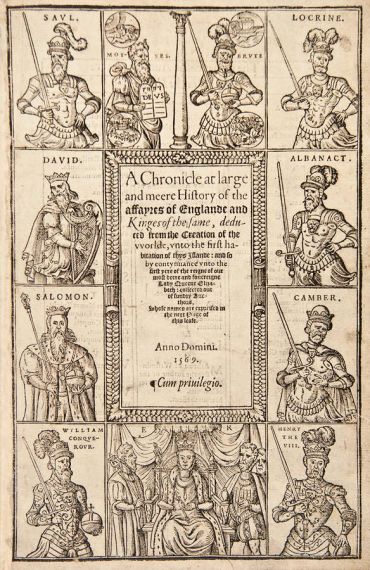 This yere also king Richard was assoyled, [sic] of the rebellion that he vsed against his father. In recompence whereof (sayth Guydo) he voluntarily tooke vpon him and promised to warre vpon Christes enemies, but to speake truly, it was at the request of the Pope.
And this yere, as sayth Fabian, king Richard gaue ouer the Castelles of Barwike, and Rokesborough to the Scottishe king, for the summe of ten thousand pound, for the exployte of his voyage to Jerusalem.
And about this tyme, as sayth John Maior, in his Chronicle of Scotland, there were many robbers and outlawes in England, among the which number, he specially noteth Robert Hood, whom we now call Robyn Hood, and little John, who were famous theues, they continued in woodes, mountaynes, and forestes, spoilyng and robbing, namely such as were riche. Murders commonly they did none, except it were by the prouocation of such as resisted them in their rifelynges and spoyles. And the sayde Maior sayth, that the aforesaid Robyn Hood had at his rule and commaundement an hundreth tall yomen, which were mightie men and exceedyng good archers, and they were mainteyned by suche spoyles as came to their handes: And he sayth moreouer, that those hundreth were such picked men, and of such force, that foure hundreth men who soeuer they were, durst neuer set vpon them. And one thing was much commended in him, that he would suffer no woman to be oppressed, violated or other wise abused. The poorer sort of people he favoured, and would in no wise suffer their goodes to be touched or spoyled, but relieued and ayded them with suche goodes as hee gate from the riche, which he spared not, namely the riche priestes, fat Abbotes, and the houses of riche Carles. And although his theft and rapyne was to be contemned, yet the aforesayd Aucthour prayseth him and sayth, that among the number of [p. 85:] theeues, he was worthie the name of the most gentle theefe.
But in an olde an auncient Pamphlet I finde this written of the sayd Robert Hood. This man (sayth he) discended of a noble parentage: or rather beyng of a base stocke and linage, was for his manhoode and chiualry aduanced to the noble dignitie of an Erle, excellyng principally in archery, or shootyng, his manly courage agreeying therevnto: But afterwardes he so prodigally exceeded in charges and expences, that he fell into great debt, by reason whereof, so many actions and sutes were commenced against him, wherevnto he aunswered not, that by order of lawe he was outlawed, and then for a lewde shift, as his last refuge, gathered together a companye of Roysters and Cutters, and practised robberyes and spoylyng of the kinges subiects, and occupied and frequented the Forestes or wilde Countries. The which beyng certefyed to the King, and he beyng greatly offended therewith, caused his proclamation to be made that whosoeuer would bryng him quicke or dead, the king would geue him a great summe of money, as by the recordes in the Exchequer is to be seene: But of this promise, no man enioyed and benefite. For the sayd Robert Hood, beyng afterwardes troubled with sicknesse, came to a certein Nonry in Yorkshire called Bircklies, where desiryng to be let blood, he was betrayed & bled to death. After whose death the Prioresse of the same place caused him to be buried by the high way side, wher he had vsed to rob and spoyle those that passed that way. And vpon his graue the sayde Prioresse did lay a very fayre stone, wherein the names of Robert Hood, William of Goldesborough, and others were grauen. And the cause why she buryed him there, was, for that the common passengers and trauailers knowyng and seeyng him there buryed, might more safely and without feare take their iorneys that way, which they durst not do in the life of the sayd outlawes. And at eyther ende of the sayde Tombe was erected a crosse of stone, which is to be seene there at this present.
Gerardus Marcator in his Cosmographie and discription of England, sayth that in a towne or village called little Morauie in Scotland, there are kept the bones of a great and mightie man, which was called little John, among the which bones, the huckle bone or hip bone was of such a largenesse, as witnesseth Boethus, that he thrust his arme through the whole thereof, and the same bone being conferred to the other partes of his body, did declare the man to be .xiii. foote long.
But before the king tooke his iourney [to Jerusalem], great preparation was made for money.[1]

In the quotation I have include the immediate context in which this important passage on Robin Hood occurs. Grafton's account of Robin Hood and the historical context into which he inserts it may have inspired later writers, including Walter Scott, to make the outlaw a contemporary of Richard I with a period of activity falling before and during that king's ill-fated crusade. We have not yet been able to establish the exact location of the "towne or village called little Morauie in Scotland", but Geoff Spencer notes that 'Morauie' ('Moravie') is an AN form of 'Moray'[2] (cf. Latin 'Moravia'), which at the time included not only to Morayshire proper, but also Nairn and most of Banffshire.[3]

This allusion is often dated 1569, but the second volume of Grafton's chronicle, in which it occurs, was published in 1568, the first volume appearing the following year.