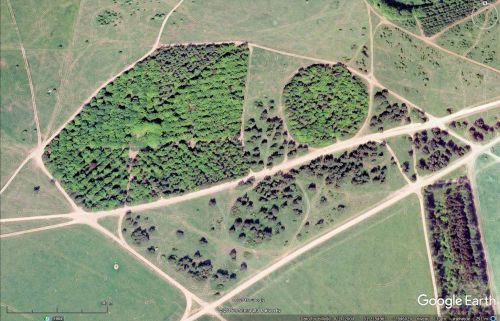 The name 'Robin Hood Ball' is properly applied to a neolithic site hidden in the lower left corner of the irregularly shaped wooded area or to the entire wooded area. The circular wooded area to the right is a separate locality named Wood's Butt (see map details below) / Google Earth. 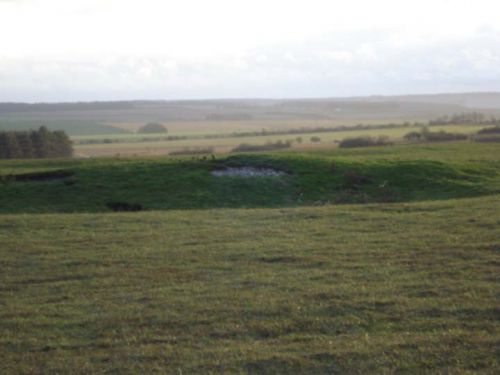 This is supposed to be a photo of Robin Hood Ball, but as the latter is in a wooded area, the earthwork shown is probably (what is left of) a tumulus c. 240 m SE of the coppice. The trees seen in the photo towards the top left would then be part of a wooded area known as Wood's Butt. / Photo by 'Chance', December 2012, via Modern Antiquary. 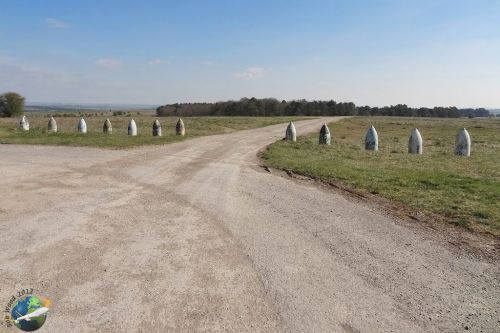 Assuming the trees in the photo belong to the coppice, Bob Wood must have got it right when he gave his photo the legend "Military road markings near Robin Hood's Ball" / Bob Wood via Panoramio. 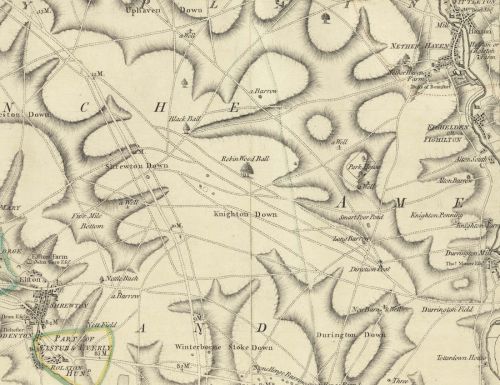 The tree at the centre represents Robin Hood Ball, which must accordingly have been a wooded area / Detail from Andrews, John, cartog.; Dury, Andrew, cartog. A Topographical Map of Wiltshire, on a Scale of 2 Inches to a Mile, from An Actual Survey ([s.l.], [1773]), sheet 5; online version at McMaster University Library: Digital Archive. 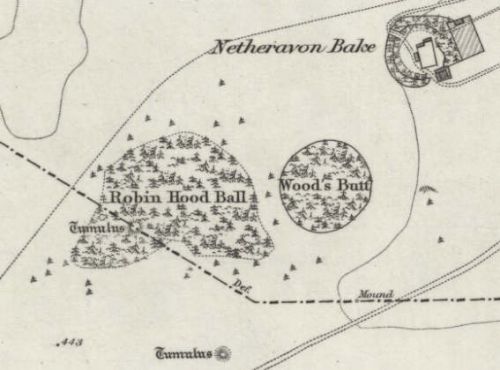 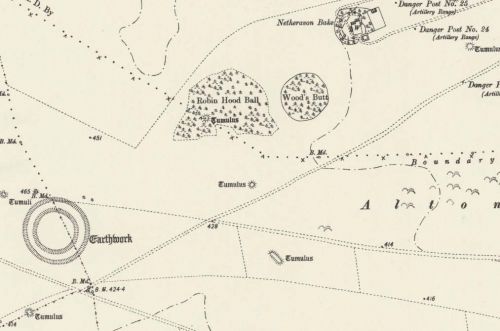 The first certain record of Robin Hood Ball near Netheravon is Andrews's and Dury's 1773 map of Wiltshire, where it occurs as 'Robin Wood Ball'.[1] The name refers sometimes to a neolithic feature just north of the Stonehenge World Heritage Site,[2] sometimes to a small wooded area within which the neolithic site is located, and also erroneously to a tumulus a little SE of the wooded area and a larger earthwork c. 350 m SW of the coppice. It is possible that the 'Whood's Baall' figuring in land deeds dating from 1591 to 1667/68 should be identified with Robin Hood Ball.

According to the English Place-Name Society's volume on Wiltshire, the ME place-name element balle (n.) (ModE 'ball') 'is common and is doubtless used for the most part in the sense [...] "a landmark of earth set up as a boundary mark," a meaning not recorded in the NED'.[3] However, in the case of Robin Hood Ball the authors note, very sensibly I think, that '[t]he reference is possibly to the tumulus here'.[4] It is hardly surprising to find a term usually applied to a landmark of earth used with reference to a minor earthwork created for some other purpose. If the name was in all probability originally applied to the earthwork, by 1877-78, when surveying was done for a 6" O.S. map of the area (see illustration and Maps section on this page), it had come to be applied to the wooded area in which the earthwork is found. This, according to Wikipedia's article on this locality, is the case already in Grenwood's 1820 map of the area.[5]

According to Wikipedia, 'it is probable that over time the name [of Robin Hood Ball] came to be associated with the enclosure instead',[6] the enclosure in question being one located c. 350 m southwest of the coppice. Let us be a little more specific: some archaeologist(s) failed to check the maps. On the 6" O.S. map of the area published in 1926 the name 'Robin Hood Ball' is unmistakably applied to the coppice, not the wheel-shaped earthwork (see link in Maps section below). As we just saw, the English Place-Name Society volume on Wiltshire, which was published in 1939,[7] also correctly identifies the locality. At least as late as 1958, the Ordnance Survey was in no doubt that the coppice, not the earthwork, was the locality named Robin Hood Ball (see Maps section below). The mistaken identification of the enclosure as Robin Hood Ball may have been introduced or given impetus by an article on the enclosure published six years later in a semi-scientific archaeological magazine.[8] The gentleman behind the moniker 'Chance' who took a photo in December 2012 of what he thought was Robin Hood's Ball seems to have photographed a neolithic feature southeast of the coppice (see photo elsewhere on this page).[9] Perhaps he was led astray by the Wikipedia article, which incorrectly has the coppice northwest of the earthworks?

PastScape, an official archaeological website, uses the name 'Robin Hood Ball' to refer to the earthwork c. 350 m SW of the coppice, describing it as '[a]n Early Neolithic causewayed enclosure known as Robin Hood's Ball. It is an earthwork comprising two circuits of bank and ditch, enclosing an area of circa 3.5 hectares'[10] (see map detail elsewhere on this page). It is clear from the sources cited there that this erroneous nomenclature has support among late 20th century British archaeologists,[11] but as just noted, it does not find any warrant in the older O.S. maps of the area, neither does PastScape's use of 'Robin Hood's Ball Clump' to refer to the coppice. The archaeologists can hardly have studied the O.S. maps which unmistakably identify the coppice as Robin Hood Ball. The use of a solitary tree to represent the Ball in the Andrews and Dury 1773 map (see map detail elsewhere on this page) only makes sense if it was intended to refer to a wooded area, which must be the coppice, since the localities to which the name has been applied by mistake are not wooded (it should be noted, though, that one of them has been partially ploughed away).[12] Etymology argues strongly, and map evidence conclusively, against 'Robin Hood Ball' referring to the causewayed enclosure or the tumulus SE of the coppice. The evidence points clearly to the clump of trees, and comparison with other occurrences of the place-name element balle suggests that the name was originally applied only to the mound that was located within the coppice, as was indeed suggested by J. E. B. Gover et al. in 1939.[13] If this was the original denotation of 'Robin Hood Ball', it must be noted that the solitary tree on the 1773 map suggests that the place-name may already then have come to refer to the entire surrounding coppice.

The writer of the PastScape entries on these localities seems to have realized the archaeologists' mistake, for on his page on Monument No. 218891 – the mound within the coppice, i.e. the locality properly and originally named 'Robin Hood Ball – he makes this note: 'Query whether Robin Hood Ball was originally the name of this barrow'.[14] The monument in question is a Bronze Age barrow mound measuring 26 m in diameter and 1.5 m in height. It was once surrounded by a quarry ditch which has filled in over the years. The part of Salisbury Plain on which it is situated is a Defence Training Estate, and unfortunately the military has frequently dug into the mound.[15] It does not in its present condition rise much above the surrounding area, and since it also lies within a coppice it is far from conspicuous. This may help explain why it has had its name 'stolen' by other more easily visible and recognizable neolithic remains in the near vicinity.

According to the early 6" and 25" O.S. maps of the area, the circular clump of trees immediately east of the coppice in which Robin Hood Ball is located is named Wood's Butts. In our discussion of the so far unlocalisable Wiltshire place-name Robinhood Butts, we suggest that this may be identical with Wood's Butts. Robin Hood Ball is first (certainly) recorded as 'Robin Wood Ball', and Wood's Butts could be a variant of Hood's Butts.[16] The proximity to Robin Hood Ball also strengthens the case somewhat, for Robin Hood-related place-names often occur in clusters. However, it must be emphasized that this identification is quite tentative. Nineteenth-century copies of three land deeds, dated [1591], [1593], and [1667/68] respectively, refer to a locality in this vicinity named 'Whood's Baall'. As the National Archive catalogue suggests, this should possibly be identified with Robin Hood Ball.[17] This would seem more likely than 'Whood's Baall' being identical with Wood's Butts, but identifying either with 'Whood's Baall' might lead one to the assumption that the original element was wood. Yet as just noted, 'Wood' for 'Hood' was by no means uncommon, and we can in fact point to a roughly contemporary case where 'Wood' tout court stands for 'Robin Hood' or vice versa. In 1585, some students of Gray's Inn were sent to prison for what the young culprits themselves referred to as their 'unadvised facte in defacinge Woods stake'. The object they had wantonly destroyed was, according to an entry made the same year in an account book then at Gray's Inn, identical with 'Robin Hoods stake', one of the archery targets on Finsbury Fields.[18] To find an archery target named after the outlaw is hardly surprising, but it must be noted that while some had more fanciful names, they were often named after archers who presented them, so it is possible that the stake had been donated by, and named after, a man named Wood, its name being then reinterpreted as referring to the uber-archer Robin Hood. In either case, it is significant that one name stands for the other in records written the same year. If the etymology of the name is not clear here, then neither is it in the case of the earthwork near Netheravon.