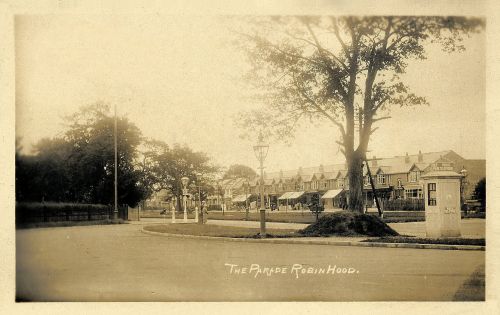 According to William Dargue's web-based 'History of Birmingham Places & Placenames', the name Robin Hood 'refers to the junction of the Stratford Road and Robin Hood Lane and the surrounding shopping centre'.[1] This is the area indicated on the 6" O.S. map detail he includes, but the early 25" O.S. maps have 'Robin Hood' about 100 metres north of this location, near the site of the future Robin Hood Hotel.

Dargue notes that the name dates from c. 1800 but 'has no connection with the English hero of Sherwood Forest but is probably a misreading of "Robin Wood"'. He continues: 'This woodland stretched from Stratford Road/Highfield Road junction down to the River Cole at Trittiford. At some time in the 19th century the name was misread or miswritten as Robin Hood'.[2] If the area was in fact wooded around 1800, Dargue may well be right, but it must be noted that 'Robin Wood' occurs fairly often as a variant of 'Robin Hood'. See IRHB's page on Wood for Hood. In all events, 'Robin Hood' as name of this area provided the direct or indirect inspiration for twenty or so localities and businesses in the neighbourhood. See Hall Green place-name cluster. The earliest reference IRHB knows so far is a 25" O.S. map published in 1888 (see Maps below).

The messages written on the two first of the late 18th or early 20th century postcards included in the gallery below give us a glimpse of the quite significant changes the area underwent during that period. The first begins as follows: 'this [sic] is the lane now that used to be a little country Lane [sic] when you were with aunt Clarice'. The other includes this: '[...] it has altered up here[;] you would hardly know it[;] well in fact I shouldnt [sic] have done. There is a lovely picture house close too [sic] and all kind of shops. I am sending these [probably three] Photos [sic] to show you the difference from when you saw it'. The third postcard in the gallery, in all probability part of the 'Photos' sent to 'Dear Ed', is of the 'divided back' type, which was introduced in Britain in 1902.[3]