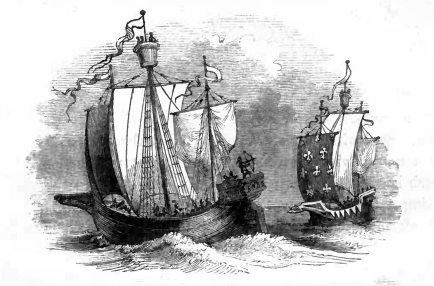 On the only occasion Robin Hood went fishing he did so in style. Woodcut by F.W. Fairholt, from F.W.'s review of Gutch, John Mathew, ed. A Lytell Geste of Robin Hode, with Other Ancient & Modern Ballads and Songs relating to this Celebrated Yeoman (London, 1847).

1779 - Charlton, Lionel - History of Whitby and of Whitby Abbey

In the days of this Abbot Richard, and Peter his successor, lived that famous and renowned outlaw Robin Hood, who took from the rich that he might have wherewithal to give to the poor. He many years kept under him a considerable number of men, who lived by rapine and plunder. He resided generally in Nottinghamshire, or the southern parts of Yorkshire: But when his robberies became so numerous, and the outcries against him so loud, as almost to alarm the whole nation, parties of soldiers were sent down from London to apprehend him: And then it was, that, fearing for his safety, he found it necessary to desert his usual haunts, and, retreating northward, to cross the moors that surrounded Whitby, where, gaining the sea-coast, he always had in readiness near at hand some small fishing vessels, to which he could have refuge, if he found himself pursued; for in these, putting oﬀ to sea, he looked upon himself as quite secure, and held the whole power of the English nation at deﬁance. The chief place of his resort at these times, where his boats were generally laid up, was about six miles from Whitby, to which he communicated his name, and which is still called Robin Hood's Bay. There he frequently went a fishing in the summer season, even when no enemy approached to annoy him; and not far from that place he had butts or marks set up, where he used to exercise his men in shooting with the long-bow. It was always believed that these butts had been erected by him for that very purpose, till the year 1771, when one of them being dug into, human bones were found therein, and it appeared they had been burying-places for the dead used by our pagan ancestors, either the Danes, the Saxons, or the ancient Britons, all of whom, it is certain, raised such kind of monuments over the bodies of their deceased friends and relations; which practice they borrowed from the Celts and Gauls; and these probably had it from the Jews, the Egyptians, and other eastern nations, who used it soon after Noah's ﬂood. However that be, there is no doubt but Robin made use of those houes or butts when he was disposed to exercise his men, and wanted to train them up in hitting a mark.

Tradition further informs us, that, in one of these peregrinations, he, attended by his trusty mate Little John, went to dine with the Abbot Richard, who, having heard them often famed for their great dexterity in shooting with the long-bow, begged them after dinner to shew him a specimen thereof; when, to oblige the Abbot, they went up to the top of the Abbey, whence each of them shot an arrow, which fell not far from Whitby-Laths, but on the contrary side of the lane; and in memorial thereof a pillar was set up [p. 147:] by the Abbot in the place where each of the arrows was found, which are yet sanding in these our days; that ﬁeld where the pillar for Robin Hood's arrow stands being sill called Robin Hood's Field, and the other where the pillar for Little John's arrow is placed, still preserving the name of John's Field. Their distance from Whitby-Abbey is more than a measured mile, which seems very far for the flight of an arrow, and is a circumstance that will stagger the faith of many; but as to the credibility of the story every reader may judge thereof as he thinks proper; only I must here beg leave to observe, that these very pillars are mentioned, and the ﬁelds called by the aforesaid names, in the old deeds for that ground, now in the possession of Mr. Thomas Watson.[3]