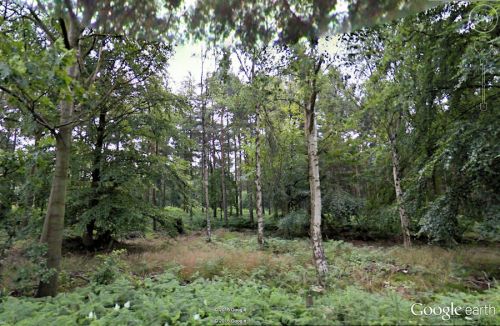 Located at the north end of Bagot's Wood, 4.55 km SSW of Uttoxeter, Little John's Birch Coppice is first mentioned in 1823 (see Records below). While the coppice is not included on any of the 6" O.S. maps of the area online at NLS, the maps, published 1884 to c. 1849, all include Little John Birch tout court. Presumably this was a birch tree that gave its name to a coppice in which it stood. Also included on the maps is Big John Birch (see allusion below), which stood c. 300 m ESE of Little John Birch (Coppice). A Google search on 25 Sep. 2016 yielded no relevant results except a PDF of the printed source of the allusion, so this entry is to all intents and purposes the World Wide Web debut of Little John Birch and its coppice.

The coordinates I have indicated for the coppice differ very slightly from those I cite for the birch itself. This difference is not significant; it serves simply two separate the markers indicating the to place-name entries on the Staffordshire overview map. It is not possible to establish the exact site of the birch from the O.S. 6" maps.

A particular of Woods and Plantations belonging to the Right Honorable William Lord Bagot, in the Parishes Abbot's Bromley and Hanbury, lying together and surrounding Bagot's Park, exclusive of Woods and Lands planted within the ancient boundary of the Park, and also of detached Plantations in the said Parishes. [...] Big John Birch [...] Little John Birch Coppice [...][1]