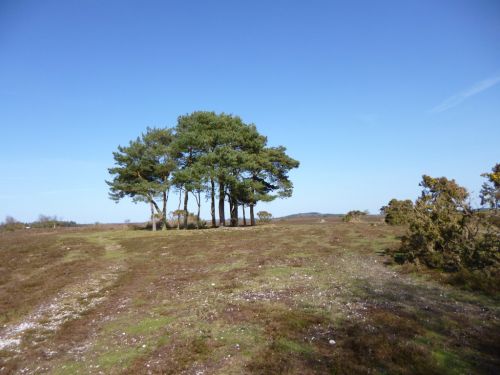 The three clumps of Scots fir & Weymouth pine – Whitefield[,] Robin Hood's, & Dorridge – were planted by the 2nd Lord Normanton to give landmarks & variety to his view of the long line of the New Forest Hills from Somerley – so the story is told – Whitefield & Dorridge were planted about 1835 – Robin Hood's about 1850 – Dorridge is the highest ground on the common – 257 feet above the sea level – while the lowest part is at the caltle [sic, for 'cattle'] stop, where the Huckles brook leaves the common – 100 feet above the sea level.[1]

IRHB's brackets. The first (1910) edition of Heywood Sumner's Book of Gorley[2] has not been available to us.

Sumner was a painter and craftsman with a degree in law who developed a strong interest in the archaeology, geology and folklore of Hampshire. The printed book is essentially a facsimile of his handwritten MS, including his beautiful illustrations. One of these shows Robin Hood's Butt, which is also included on a map.[3] The second Lord Normanton mentioned in the quotation was Welbore Ellis Agar (1778–1868).[4]