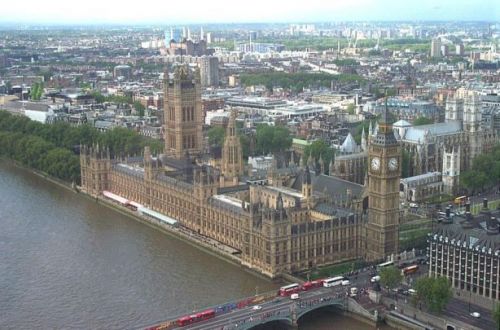 The Palace of Westminster from The London Eye / Bill Henderson, 21 May 2002, Creative Commons, via Geograph.

On 18 January, 1510,[1] Henry VIII, the earls of Essex and Wiltshire and other noblemen burst into the queen's chamber, dressed as Robin Hood and his men and brandishing or carrying bows and arrows as well as swords and bucklers to complete the outfit. They entertained the ladies with dances and unspecified 'pastime', after which they left.

[...] The king soone after came to Westminster, and there kept his Shrouetide with great bankettings, dansings, and other iollie pastimes.
And on a time the king in person, accompanied with the earles of Essex, Wiltshire and other noble men, to the number of twelue, came suddenlie in a morning into the queenes chamber, all apparelled in short coates of Kentish Kendall, with hoodes on their heads & hosen of the same, euerie one of them his bow and arrowes, and a sword and a buckler, like outlawes, or Robin Hoods men. Whereat the queene, the ladies, and all other there were abashed, as well for the strange sight, as also for their sudden comming, and after certeine danses and pastime made, they departed. On Shrouesundaie the same yeare, the king prepared a goodlie banket in the parlement chamber at Westminster, for all the ambassadors, which then were here out of diuerse realmes and countries. [...][2]