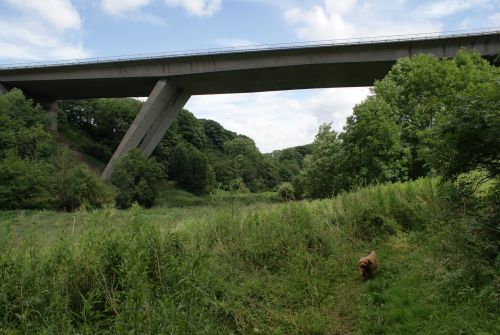 A1 viaduct looking east at Wentbridge, photographed by Richard Hawlor 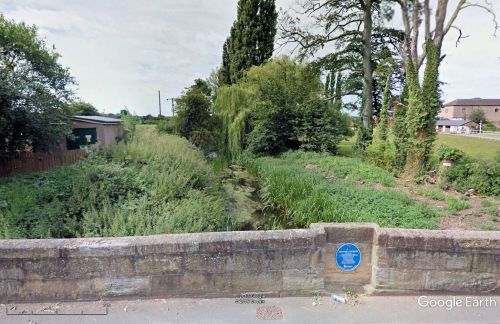 Looking west from the bridge over the Went around which the village of Wentbridge grew up. The blue plaque with white lettering commemorates this locality's connection with the Robin Hood tradition / Photo: Google Earth Street View. 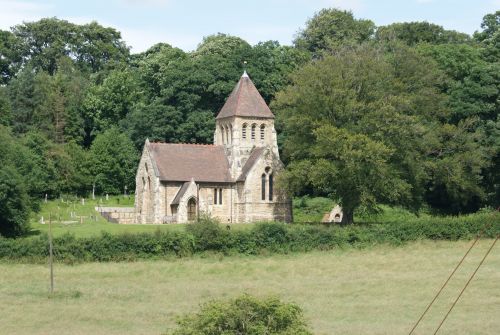 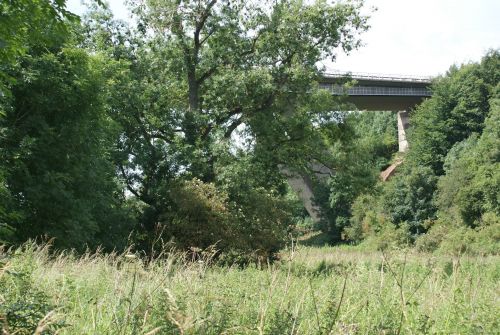 A1 viaduct looking west at Wentbridge, photographed by Richard Hawlor 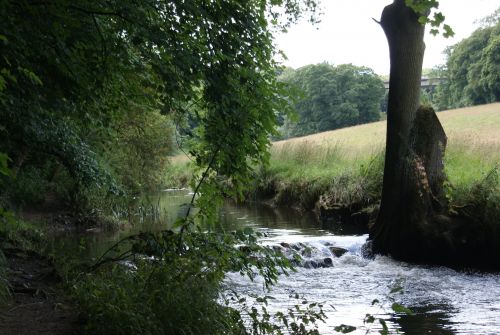 Referred to in the Gest of Robyn Hode and Robin Hood and the Potter, Wentbridge is the name both of a bridge – first mentioned in 1190 as "pontem de Wente"[1] – over the river Went and the village that grew up around it at the northern boundary of Barnsdale. The village lies athwart the original Great North Road and hence would have been well known to travellers along this main road from London to the north and Scotland.

Before the modern road was constructed, the deep incline at Wentbridge, 1 in 16, made this a dangerous place for travellers on horseback or in a horse driven carriage. Passengers would generally have had to leave the carriage during descent, as braking was dangerous, and during ascent in order to lighten the burden for the horses. Hence this was a very well chosen locale for a tale about a hero who derived part of his income from highway robbery.[2]

While other cases of robbery said to have occurred at nearby Sayles or in Barnsdale are known, at least one robbery is known to have been committed at Wentbridge during the 1320's.[3]

The mention of Wentbridge in John Skelton's Why come ye not to Courtv is intriguing. Not only does Skelton cite a Robin Hood proverb in that work, he is also the only known author to whom it would make any sense at all to attribute the authorship of the Gest of Robyn Hode.

In addition to the matter discussed here, it is important for an appreciation of the importance of Barnsdale to the Robin Hood tradition to read the entries on Barnsdale itself and other Robin Hood-related localitites in or near Barnsdale. See the page on the Barnsdale place-name cluster for links to these.

Joseph Hunter in his 1852 pamphlet on Robin Hood was the first to realize that in the line "[b]ut as he went at a brydge ther was a wraste-lyng", in the Gest,[4] "the name of Wentbridge appears to be enigmatically indicated".[5] When Dobson & Taylor explain "went at a bridge" as "[a] possible play on the place-name Wentbridge",[6] they are clearly erring on the side of caution. Depending on how one delimits the area known as Barnsdale, Wentbridge either formed its northern boundary or lay a couple of kilometers north of it. Only an arch-skeptic, I think, would argue against this being an allusion to Wentbridge. However, it is possible that the line as it stands was amended by a printer (or copyist) who did not know this particular locality. As it stands, the first line is rather longer than usual, and perhaps the stanza originally read:

At the time the Gest was written there would have been nothing unusual about a spelling such as "wente brydge", i.e. in two words and with lower case initial, but it would have looked like a mistake to a printer who had not heard about the locality.

[English text:]
Thirst knowes neither meane nor measure.
Robin Hoods Well was my treasure,
In a common dish enchained,
I my furious thirst restrained:
And because I drunk the deeper,
I paid two farthings to the keeper.

Thence to Wentbrig, where vile wretches,
Hideous hags and odious witches,
Writhen count'nance and mis-shapen
Are by some foule Bugbeare taken:
These infernall seats inherit,
Who contract with such a Spirit[8]

13. Morning, walked to cousin F.'s of Hunslet; rode with him and my other dear friends, Mr. Samuel Ibbetson and brother Thoresby, to Rodwell, where took leave of relations, thence through Medley, Pontefract, and Wentbridge (upon the famous Roman highway, and by the noted Robin Hood's well) to Doncaster, where we dined; thence by Bawtry, Scruby, Ranskall, to Barnby-on-the-Moor.
14. After a weary night rose pretty early; rode over Shirewood Forest, by the noted Eel-pie-house [...][9]

[...] Thence by Darrington and Stapleton Lees to Wentbrig, beyond which, upon the heights, may be seen York Minster, and it is said, also, that of Lincoln, but it was too duskish for us to do it; what I was more intent upon was the famous Roman highway, which is not only visible for several miles, but its complete dimensions, near which we drank at a curious spring, which receives its denomination from Robin Hood, the noted outlaw; after which we left the common road to Doncaster, and followed the old one, as is evident from the said Roman rig, which we followed for some time, in our road to Sprotburgh [...][10]

[1535-43:]
Thens ridyng partely thorough morisch grounde and pasture I cam to Morton Corbet village, wher I saw a fair castel of Mr. Corbettes, and a ii. miles beyond that I passid over Roden riveret, rising not far above Went village, a mile from that place.[15]

[1522:]
From Baumberow to Bothombar
We have cast up our war,
And mad a worthy trewse.
With, 'Gup, level suse!'
Our mony madly lent,
And mor madly spent.
From Croydon into Kent
Wote ye whyther they went?
From Wynchelsey to Rye
And all nat worth a flye,
From Wentbridge to Hull,
Our armye waxeth dull,
With, 'Tourne all home agayne!'
And never a Scot slayne![16]