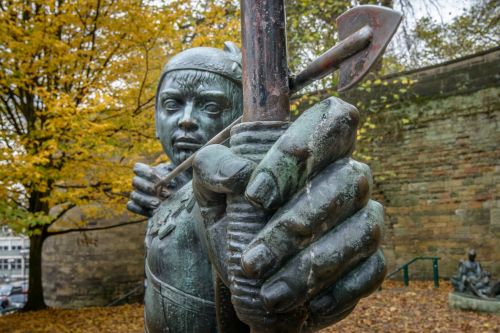 Steve Harvey via Unsplash.
Ken Bramman of the Foresters Morris Men sings a traditional May Day song at the Robin Hood statue to celebrate the coming of the summer; 1 May 2021

James Woodford's[1] full-length Robin Hood statue with its two complementary bronze plaques, on the Castle Green, was a gift to Nottingham City from Philip E. F. Clay, Esq., on the occasion of a royal visit to Nottingham on 28 June 1949.[2] The statuary was unveiled in 1952.[3]

The Robin Hood statue is one of two major works by Nottingham sculptor James Woodford that can be seen in the city. He began work on the sculture in 1950 or 1951. Cast in eight pieces of bronze, the sculpture stands on a two and a half ton block of white Clipsham stone. The stockily built archer was meant to be a realistic representation of a medieval Englishman but has often been criticized for not living up to (anachronistic) expectations inspired by portrayals of the outlaw in films. The arrow Robin Hood shoots was repeatedly stolen, and eventually it was decided to leave the statue 'arrowless'.[3]