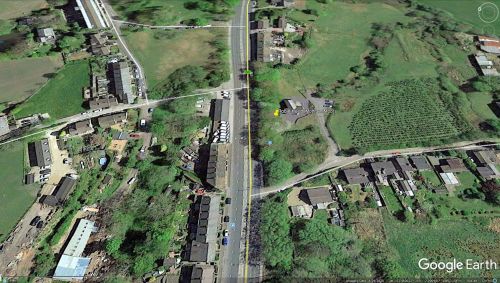 The Robin Hood Inn in Mottram Moor – between Mottram in Longdendale and Hollingworth – was situated c. 40 metres east of Carrhouse Lane, on the south side of the A57. It was in existence by 1798.

The freemason 'Lodge of Loyalty' held its meetings there from its founding in 1798 but had moved to another public house by 1816.[1] It has been suggested that the pub was built c. 1770.[2]

The 1845 tithe award for Mottram in Longendale lists the 'Robin Hood Public House' with John Tollemache, Esq., as landowner, John Beard as occupier, a land area of 39 roods (986.42 m2), and nothing entered under 'State of Cultivation'.[3] John Beard was still publican in 1860.[4] The Robin Hood was a Wilsons Brewery pub.[5] When the level of the A57 was raised, the building became isolated. It was subsequently converted into a private residence but was severly damaged by fire in the 1960.[2] It was subsequently demolished, probably in 1977, though according to others this was in the 1960s.[6]

According to local tradition recorded in the 1990s, the name of this public house was inspired by the discovery, near a well in the immediate vicinity, of a figure depicting an archer, which was locally interpreted as being Robin Hood. For this to be the case, the sculpture would have to have been discovered about 200 years before this traditional explanation of the name of the public house was recorded. While this is not impossible, it is also not something that should be accepted without evidence.

Some of the maps listed below have 'P.H.' at the site of the pub.