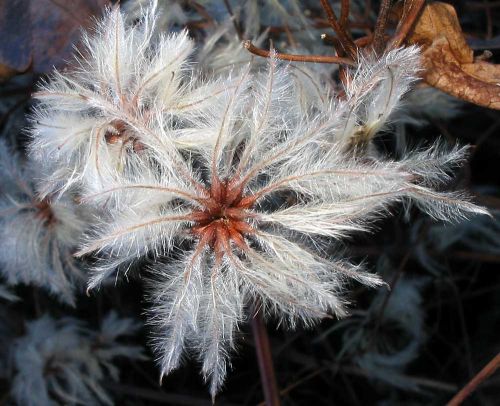 This sight reminded someone of feathers or an old man's beard / Michael Gasperl; Wikimedia.

The most common popular names for clematis vitalba are probably 'traveller's joy' and 'old man's beard', but according to the author R.M. Gilchrist, writing in 1913, the plant was also known as 'Robin Hood's feather' in several counties.[1] I am not aware if this name is still in use. The plant is a climbing shrub with branched, grooved stems, deciduous leaves and scented white-green flowers with fluffy underlying sepals. A native plant in the UK, it is common throughout England south of a line from the Mersey to the Humber as well as in the south, east and north of Wales. It is widely planted outside its natural range and may be found as far north as the southern highlands of Scotland. Its many fruits have long silky appendages, and it is not too difficult to imagine that it may have reminded someone of an old man's beard. The plant in fruit is obviously suggestive of feathers.[2] If the connection to Robin Hood was his wearing a feather in his hat, this would probably indicate a 19th or 18th century date for the folk-name 'Robin Hood's feather. The hat with a feather with which Robin Hood is now very often depicted was not part of a medieval yeoman's typical wardrobe. It was a later invention.