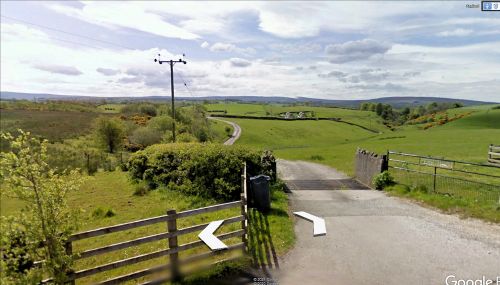 Looking SSW from Russels Lane. Little John Hall was situated a few tens of metres beyond and to the right of the rightmost house or farmstead near centre / Google Earth Street View.

A piece of pasture on Perrymoor, near Outlay, c. 400 m south of Russels Lane, Tatham, was known as Little John Hall in the mid-19th century. In view of the names of other fields in the immediate vicinity it is quite uncertain if the part 'Little John' had anything to do with Robin Hood's second in command.

The plot figures in the 1848 tithe award for the parish of Tatham, with a Robert Ayer listed as owner and occupier, an area of 2 acres, 3 perches and 17 roods (11558.83 m2), and the state of cultivation given as pasture. The next close to the west, Great John Hall, a rather larger piece of pasture with an area of 5 acres, 3 perches and 13 roods (23598.23 m2) was also owned and occupied by Ayer, as was John Hall Bottom, 1 rood and 19 perches (1492.28 m2) of pasture located c. 115 m to the northeast of Little John Hall.[1] In view of the two latter names, it is by no means certain that Little John Hall had anything to do with Robin Hood's next in command. If we had only known of John Hall Bottom, we would have been inclined to regard 'John Hall' as the name of a former owner or occupier, but this seems unlikely in view of the other two field names, where 'John Hall' would, on this hypothesis, be the central part. We have no statistics to back this up, but having looked through hundreds of tithe awards, we are fairly certain that though personal names may modify another element, they do not often occur as the main part of field names. The field name 'Little John Hall' must remain unexplained and we should allow it the benefit of doubt, for on formal criteria it qualifies as a Little John-type name, and hence belongs in the broad category of (possible, likely or certain) Robin Hood names.

The contours of the two largest closes are indicated on the 25" and the earliest 6" O.S. maps listed below. See adapted map detail in the image gallery below in which all three are indicated.