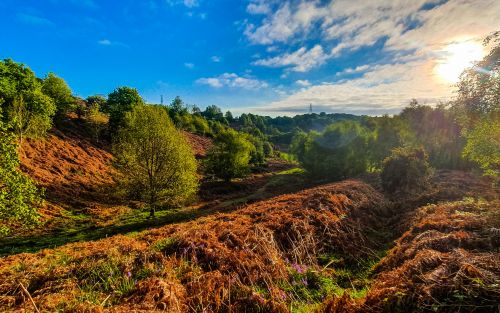 Photo of 'the Robin Hood's Hills as you first see them from Shoulder of Mutton Hill in Annesley' / Courtesy Rich.

Leaving this melancholy monument of feudal animosity [sc. an unfinished manor house near Annesley Woodhouse], by the farm-house I have mentioned, you come in a walk of about half a mile to the ridge of those wild, grey, ferny uplands, Robin Hood's Hills, over which, most probably, Washington Irving has already taken you, in his delightful reminiscences of Newstead Abbey. You have rested at the top — you have gazed again and again on the countless hamlets, and halls, and cottages, and spires which stud the beautiful, far-stretching, western landscape, to where it closes with the sky up amid the Peaks of Derbyshire — and you have recognised the old farm-house at Grives, sending its long, long wreath of blue smoke gracefully upcurling in the still, pure sunshine, below you, but where is the romantic little glen you so recently rejoiced in? Conscious as you are that it can not be more than half a mile distant, see you no pleasant sign of its locality? None! any more than if it had been opened by enchantment just for the occasion, and then immediately closed again forever![1]