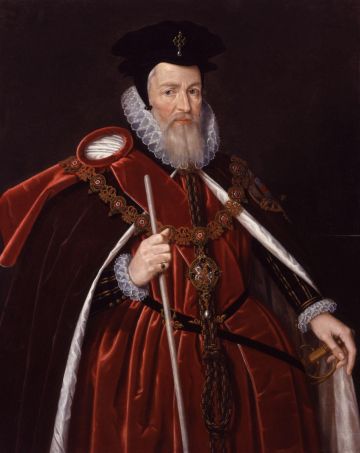 Many other monuments ther ar, but so blemyshed by fablinge antiquitie that I dare not holde your Lordship with them: as St Tylds wormes figured in stone neer Whitby, wher they say no venemus serpent is seen;110 Mowlgrave castell, somtymes duke Wades howse, whose grave of incredyble length is showed neer ther;111 the extancyes of our outlawe Robin Whood in Barronsdall neer Doncaster; & such lyke dyvers, so dymmed and defaced by long tyme & lacke of trewe writeres as they seem to me to resemble the vews of thinges so far distant from sight as no ey can deem rightly of their shape or substance, thoughe yt may be dymly percevid that som thinge ther is.[1]

Between July 1587 and August 1590, James Ryther (1535/36–1595);[2], lord of the manor of Harewood and a member of the Commission of the Peace for the West Riding of Yorkshire, wrote nine letters to the Lord High Treasurer of England, William Cecil (1520–1598), First Baron Burghley. The first letter includes a description of Yorkshire, which together with an appendix runs to 18 printed pages. Ryther is the first resdent of Yorkshire known to have left a description of the county.

Note 111: Ryther adds in an MS note on Mulgrave that it 'is in showe that best howse I know but Pendragon castell; yt is as stronge & straunge in sytuacion; yt belonged to the name of Malco Lacu or Maulom, last to Bygot, whose heir generall hath it, nowe by the name of Radclif'. The editor adds information on the de Mauleys and refers for 'duke Wades howse' to Chaucer's Troilus and Criseyde (III, 614), to Henry Speght's comments on this and a passage on traditions relating to Wade in John Leland's Itinerary. He furtehr notes that Pendragon Castle in Mallerstang, Westmorland, 'had belonged to the Cliffords since the early fourteenth century'.

The OED explains the obsolete noun 'extancy' as '[t]he fact, quality, or state of standing out or being protuberant; also concrete a protuberance'.[3]

The English language has changed considerable since James Ryther wrote the above, but his appraisal of the epistemological status of more or less (un)historical traditions such as that of Robin Hood still seems reasonable.