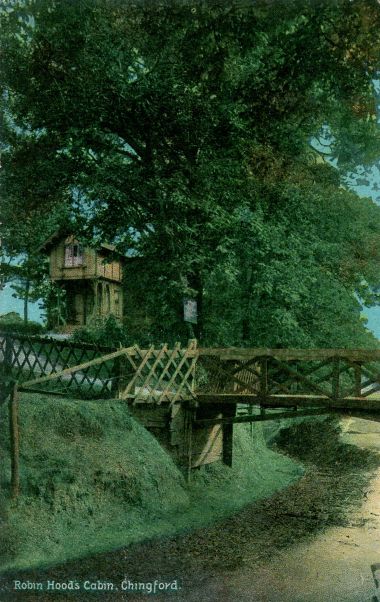 The Swiss Cottage was "a timber building which was built around 1850 and stood in a corner of the grounds of Lake House [Bush Wood, Wanstead, Greater London], itself an annexe of Wanstead House. After the present Lake House estate was built, the cottage remained at the edge of Bush Wood and was accessible by a bridge across a ditch or stream".[1] The Swiss Cottage never seems to have had anything to do with Robin Hood, but an early 1900's colour postcard published by Shurey's Publications as an inlay in some of their novels – the series were entitled Smart Novels, Dainty Novels and Yes or No – depicts this cottage, mislabelling it "Robin Hood's Cottage, Chingford".

According to the publishers, the novels were marketed in Britain, the Colonies, and foreign countries. Probably due to this wide circulation, the postcard is still quite easy to find today. One copy is postmarked 1908, which is probably not very far from the date of publication. This postcard has thus had something like a hundred years to spread the incorrect notion that there once was a Robin Hood's Cottage in Chingford, and it is only as a warning against this that the Swiss Cottage in Wanstead merits attention in a Robin Hood-context.[2] The Swiss Cottage was torn down in 1962.[3] A Google image search on 13 January 2018 left no doubt that it is in fact the structure depicted on the postcard.[4]