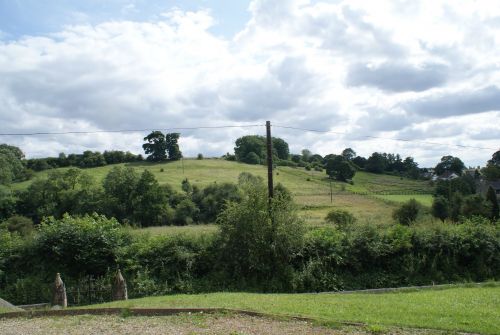 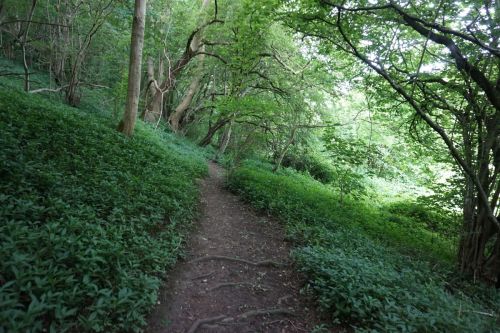 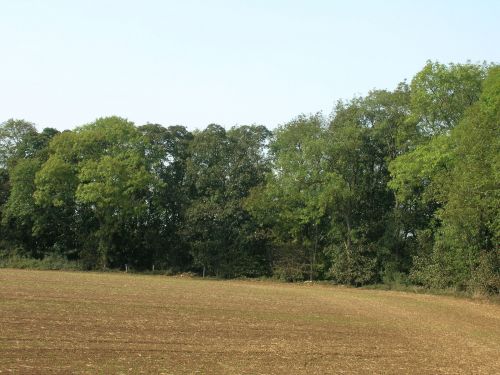 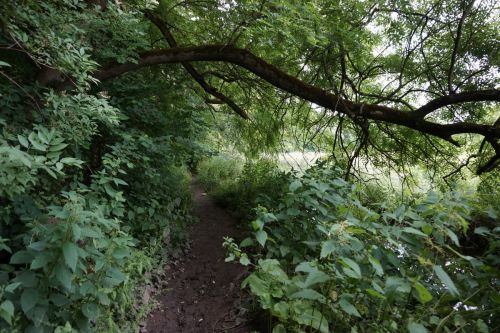 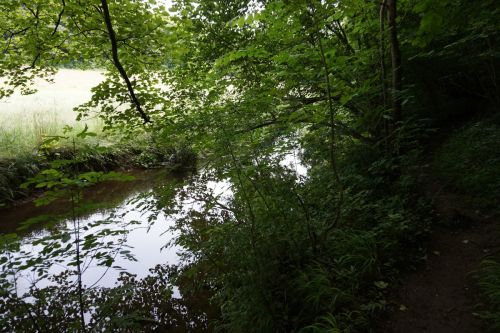 In the Gest of Robyn Hode, a tale which has the outlaws in part based in Barnsdale, Robin Hood sends Little John, Scathlock and Much the Miller's Son to a place called 'the Sayles' to look out for a traveller they can 'invite' to dinner with Robin Hood — a pleasure that will be far from free for a rich guest. This place-name reference is significant as the Sayles are an obscure locality unlikley to have been known much outside the immediate area. Its inclusion in the Gest tells us that the writer knew this part of the West Riding well. From the 1970s on several historians have identified this Sayles with a Sayles Plantation near Wentbridge. Though at first sight plausible, this is demonstrably impossible. The locality referred to in the poem can instead be shown, with a high degree of probability, to have been situated c. 4 km south of Sayles Plantation and Wentbridge.

In addition to the matter discussed below, it is important for an appreciation of the importance of Barnsdale to the Robin Hood tradition to read the entries on Barnsdale and other Robin Hood-related localities in its vicinity. See the page on the Barnsdale place-name cluster for links to these.

Joseph Hunter felt that when Robin sends his men to the Sayles to look out for a dinner guest, there 'is in these few words something which impresses a person acquainted with the district with the conviction of the reality of these events, for the Sayles is a place hardly known'.[1] Here he was surely going too far. All we can conclude from the inclusion of an allusion to an obscure locality in a literary work is that the work must have been written by someone who had intimate knowledge of the area in which his tale was set. This of course is significant, for the Gest is certainly the single most important source in the Robin Hood tradition. Yet it is a literary work; those who read it as garbled or coded history do so at their peril, and that the tale includes scenes set in a realistic locale obviously has no bearing on whether it deals with actual events. However, Hunter went on to note that there was in his time a family named Sayles living at Wentbridge, but Sayles was hardly any longer known as a place-name and he did not believe it could be found on 'any map of Yorkshire'. The latter statement is a little surprising. It may be true that as he wrote this, no later than 1852, no such locality was found on any existing map of Yorkshire. However, just a couple of years later was to appear a 6" O.S. map which inludes Adwick Le Street, Burghwallis, Hampole, Norton etc. This is Barnsdale and its vicinity, and the map, which was based on a survey carried out in 1849, a couple of years before Hunter published his important pamphlet on Robin Hood[2], does in fact include two localities in Barnsdale whose names include the element 'Sales'. See Sayles (Barnsdale).

Hunter established that there was in fact a place named Sayles 'in Barnsdale or close to it'. This was a quite small tenancy of the Manor of Pontefract, valued at only one-tenth of a knight's fee. He had found a few records referring to this locality, including a 17th century confirmation of a land grant, noted in his MS notes on Robin Hood, and an 1857 terrier which refers to a 'Sailes Close'.[3] However, as far as we can tell, he made no attempt to locate the place. Dobson and Taylor did. They noted that establishing the exact location of Sayles was 'not in fact a particularly arduous task', for it still exists as Sayles Plantation, 'on the very northern edge of Barnsdale and five hundred yards east of Wentbridge'.[4] They did not normally shy away from arduous tasks, and it is to be regretted that they felt so certain of their identification of the Sayles that they looked no further. As will be clear shortly, whether or not it is the location (or one of the locations) Hunter had found evidence relating to, Sayles Plantation in fact cannot be the locality the author of the Gest had in mind.

Trouble at the bridge

A brief scene in the Gest takes place at Wentbridge, the bridge – surrounded by a village named after it – over the Went, in the deeply cut valley of the same name. In the horse-driven era this would have been a well-known, perhaps even at times a dreaded, locality along the Great North Road, for the incline there was about the steepest one might have to contend with on any English road. Horses could not drag coaches uphill, and downhill braking was hazardous, so passengers would be asked, if possible, to get off and walk down and up again before re-entering the coach. Such moments must have been highly opportune for highway robbers, and at first sight its proximity to such a locality seems to greatly strengthen the claim of Sayles Plantation to be the Sayles of the Gest. Yet there is a very serious problem. To see it a good deal of background is required.

In the Gest, a wrestling contest at Wentbridge, in the village if not at the bridge, is turning sour because the champion, a yeoman, is from out of town. The knight with a retinue of a hundred interferes, for the love of Robin Hood the yeoman, to save the poor yeoman champion and in a gesture worthy of a man of his class hands the victor the prize and buys from him the pipe of red wine that comes with it, asking that it be set abroach, '[d]rynke who so wolde'[5]. The display of force pacifies the angry crowd, and the free drink serves as a powerful anodyne, and so – after a while, we must understand – peace is reestablished, the champion yeoman saved. The knight is on his way to Robin Hood to pay back his loan on the appointed day, and the wrestling intermezzo serves to delay him for a reason that makes him not only blameless, but worthy of praise, as he indeed later receives from Robin Hood, for helping a good yeoman in need. While the knight is busy pacifying the crowd at Wentbridge, Robin Hood, impatiently waiting for him, has sent Little John, William Scathlock and Much up to the Sayles to look out for a dinner guest, and soon one turns up in the shape of the high cellarer of St Mary's Abbey, who is immediately assumed by Little John to be sent by the Virgin, who was the knight's guarantor for his loan, to pay it back on his (and her) behalf, seeing that the debtor has not turned up in person. The high cellarer is served dinner and made to pay the knight's debt twice over, after which he is allowed to leave. The knight then turns up, somewhat late because of the incident at the wrestling contest. Robin will not accept the knight's payment for his loan, for St Mary has already paid it twice over through the high cellarer of her abbey.

One of the arguments in favour of identifying the Sayles of the Gest with Sayles Plantation is that the latter supposedly commands the stretch of the Great North Road passing through and over Wentbridge. This, according to a writer who lived in the area for many years, is only partly true.[6] To the extent that it is not true it makes Sayles Plantation irrelevant, for in the Gest the Sayles is a place from which the Great North Road can be kept under observation. To the extent that it is true, this presents a fatal problem, for surely the hubbub in the village of Wentbridge would then be noticed at nearby Sayles (Plantation), a few hundred meters away, where the three scouts are anxiously looking out for the knight? If this were not the case, how could they have any hope of noticing a solitary traveller from there, as they do early in the tale when they first meet the knight? In fact they have absolutely no idea what is going on at Wentbridge, no idea that there is a wrestling-contest with a noisy crowd there or that the knight is there with a retinue of one hundred men, pacifying crowds and bearing gifts for Robin Hood. From where they are posted they instead spy the cavalcade of the monks of St Mary's and bring the high cellarer to Robin as a dinner guest in lieu of the knight. The two scenarios only work if the Sayles is a locality at which one can have no idea what is going on in the village of Wentbridge. So the Sayles cannot be Sayles Plantation. There might be a desperate and unattractive route of escape from this: assuming that the three outlaws are only sent to the Sayles after the knight and his retinue have left Wentbridge, but where then were the knight and his retinue after they left Wentbridge? Remember, they were on the way to Robin Hood and already running late after the brouhaha at the wrestling contest, and when the knight arrives at the outlaws' quarters, the sole explanation he gives for his delay is that he was held up saving the yeoman wrestler at Wentbridge. So we have to 'accuse' the good and upright knight of concealing having taken some detour (of which we also know nothing) from Robin Hood. It soon becomes absurd.

Clearly the assumption that the Sayles are a place from which Wentbridge can be kept under observation completely undermines the logistics of the tale. While this requires some explaining for readers who do not know the Gest well, one may perhaps feel, once one has understood the problem, that this is so obvious someone should have thought about it long ago. Part of the reason this has not happened is probably that the Gest is woven from several narrative strands in such a way that (near) contemporaneous events can be many stanzas apart.

A Sayles 4 km south of Wentbridge leads to no major inconsistencies and has much else to recommend it. So please go to the page on: Sayles (Barnsdale).

They wente up to the Saylis
These yeman all three
They loked est, they loked weest
They might no man see

They went up to the Sayles
These yemen all three
They loked est, they loked west
They might no man se