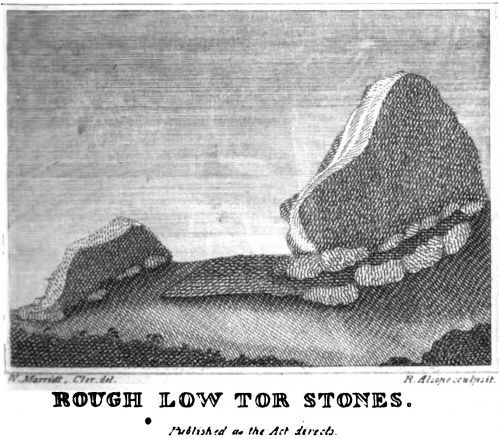 According to William Marriott's Antiquities of Lyme and its Vicinity, published 1810 (see Allusions below), there was a local tradition that Robin Hood had shot an arrow from Chinley Churn to a locality named 'Rough Low Tor'. The latter place-name is no longer current, but it would have referred to a hill somewhere north of Buxton and south of Combs in the High Peak.

The spot where the arrow landed was marked by a monument consisting of two large stones (see illustration in image gallery below). The latter sat in a field which in 1810 was known as 'Hurst Piece'. Here is Marriott's description of the locality and the stones:

On the ancient road from Waley to Buxton, beyond Whitehall [...], and in a field called Hurst Piece, is another specimen of stones. Rough Low is the southerly side of Chapel en le Frith Coombs, and distant six miles from the Knoll of Kinder bounding Edale Cross. They are near the bottom of the hill, and almost at the division of Chapel en le Frith parish from Hope; the land above the road being in one; and the land below the road in the other.
These are of a very singular and ancient fashion. They consist of two short flat stones, placed with their flat sides towards the north. The most northerly one is broken down almost to nothing. The southerly is perfect, and something in the form of a half S reversed. Its narrow front to the west is distinctly marked with two indentures from one extremity to the other; one of which is particularly visible. They have no base, but stick like wedges in the ground. The larger one is [p. 10:] to all appearances perfect, and on one side has a triangular projection.[1]

He later describes the hills and rocks near this place in so much detail that a reader with first-hand knowledge of the area could probably identify the spot.[2]

For the alleged connection between this monument and others in the High Peak, see High Peak place-name cluster.

1810 - Marriott, William - Antiquities of Lyme and its Vicinity