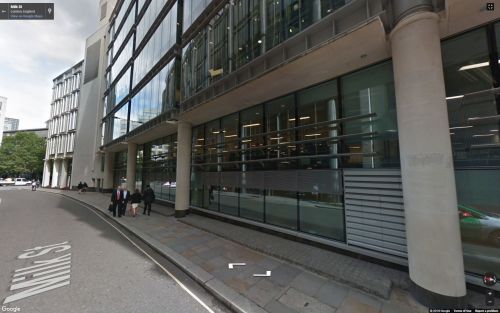 The corner of Milk Street and Robinhood Alley was very close to where the pillar closest to the camera is now located / Google Earth Street View. 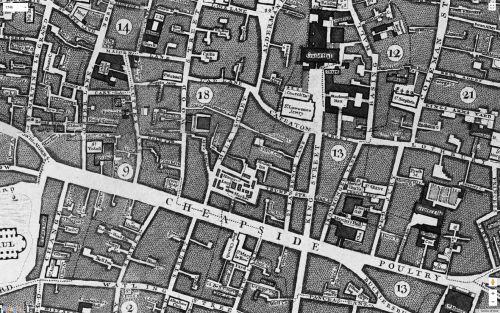 Robinhood Alley is shown but not labelled on John Rocque's 1746 map of London / Locating London's Past.

Listed in Harben's Dictionary of London under 'Robinhood Court' and by Dobson & Taylor as 'Robin Hood Court', the little street whose earliest known name was 'Robinhood Alley' ran "[e]ast out of Milk Street at No. 1, with a passage to Honey Lane Market. In Cheap Ward and Cripplegate Ward Within".[1]

The records of Sun Fire Office refer to the alley as 'Robin Hood Court' in 1792.[2] Lockie's Topography (1810), which is the first source to use the form Robinhood Court, lists the locality as follows: "Robinhood-Court, Milk-Street, Cheapside,—two doors on the R. from Honey-lane-market, entering by 116, Cheapside."[3] The two passages in John Strype's survey of London and Westminster (1720) which include the first occurrence of any variant of this street name are included below in the Allusions section. According to Harben, Ogilby and Morgan's 1677 map of London labels the street 'Robinson's Court'. I have not been able to verify this as the copies of the map available online do not include any label for the street (see Maps section below for links). The street is labelled 'Robin Hood Al[ley] on Richard Horwood's map of London and Westminster (1792-99).[4]

I live in Robinhood-court, Milk-street. On the 8th of October, at a little past seven in the evening, I returned home from Islington; while I stopped at the bottom of the court to make water I perceived a man jump out of the parlour window of my house; immediately after that I perceived another jump out; as he came past me he gave me a wheel round; then I saw a third jump out, which was the prisoner. I catched him by the throat and said, I would hold him if he was the Devil. I seised him by the collar and cried out thieves and murtherers! and I held him till some neighbours came; then my wife, who was behind me, came up and opened the door; there was nobody in the house. I went out about half after one; she came to me about an hour and an half after, and we walked up to Islington; when my wife had opened the door I took him in; when I came into the parlour I saw a table-cloth spread upon the oil-cloth, and the sundry things, mentioned in the indictment, laid upon it; they had been taken out of a drawer in the same room.[5]

I am servant to the prosecutor, I saw the prisoner come out of my master's cart in Milk-street, and he went towards the market, instead of going into the market he turned to the left, and went into Milk-street, and then turned up Robinhood-court, and I came back to Milk-street, and there I found him, he had a carcass of mutton on his shoulders, between five and six in the evening, I suspected him, and asked him where he was going with it, he said it was his master's, I asked him where his master lived, he said, it was no business of mine, I took the mutton off his shoulders, and gave it to an acquaintance of mine, and we brought it into the market, that is all the account I can give of it.[6]

Q. Was you sent for on this occasion? - No, I was coming down Milk-street between seven and eight o'clock, and hearing the cry of stop thief! I ran as fast as I could, and seeing a concourse of people running in the court, I immediately made round the other way, and catched the prisoner in the court, Robinhood-court.

Q. Was he running? - He was hardly running, when I came up to him there was so many people that he was partly stopped; I brought the prisoner back to Mr. Stevens and Nicholson's, and they gave charge of him, and I took him to the Compter; after that I went to Messrs. Neale's and Wright's, with Mr. Nicholson, and brought the shawls into his house.

Q. Were they dirty or clean? - Two parcels I believe were dirty, the others were not, they are here in court.

Q. What has been done with these shawls? - After that I then sealed them up, and left them at Mr. Nicholson's house.

Q. They were carried I suppose to the magistrate? - Yes.

Q. Did you seal them again there? - Yes, I sealed them at the Mansion House, before the Lord Mayor.

Mr. Knapp. You say the prisoner was running, and you stopped him? - Yes.

Q. He was running towards you? - Yes.

Q. One end of Robinhood-court leads into Honey-lane-market? - It does.[7]

[7 Dec. 1826:]
JAMES TOMKINS. I am a patrol of Cripplegate. - About ten minutes before six o'clock on the evening of the 25th of November, I was in Milk-street, and saw the prisoner come into Robinhood-court; he pitched a load down, which I took up, and Henman secured him; we asked whose property he had got - he said it was his own - Henman took him to Mr. Hayter's, the beadle, in Milk-street; we afterwards went to Mr. Davidson, in Bread-street; we showed him the wrappers, at Hayter's house, and he claimed them.[8]

[15 Dec. 1845:]
GEORGE BELL. I live with my mother at No. 21, Hamilton-street, Manchester-square. At the time this matter happened I was errand-boy, in the employment of Mr. Davis, of Bull Head-court, Newgate-street—on the afternoon of the 27th of Nov. I was walking up Russia-row and saw the prisoner running up Russia-row towards me—the policeman was after him, calling out, "Stop thief!"—he turned down Robin Hood-court—I followed him, and in the middle of the court I saw him drop the pocket-book—I picked it up, and by the time I got to the bottom of the court the policeman had apprehended the prisoner—he asked for the pocket-book, and I gave it to him—this is it. [9]

Adjoining to this Steet [i.e. Cheapside], on the North side, is Hony lane; being now, as it were, an Alley with a Free stone pavement, serving as a passage to Hony lane Market; the former Lane, and other Buildings, being, since the Fire of London, converted into this Market. Amongst which Buildings, was the Parish Church of St. Alhallows Hony lane; and by reason it was thought fit not to rebuild it, the Parish is united to St. Mary le Bow. This Market is well served every Week, on Mondays, Wednesdays, Fridays and Saturdays, with Provisions. The Place taken up by this Market, is spacious; being in length, from East to West, 193 Feet; and from North to South, 97 Feet. In the middle, is a large and square Market-house, standing on Pillars, with Rooms over it, and a Bell Tower in the midst. There is in the Market, 135 standing Stalls for Butchers, with Racks, Blocks, and other Necessaries; all covered over, to shelter them from the Injury of Weather; and also, several Stalls for Fuiterers. The West end of the Market lyeth open to Milkstreet, where there is Cock of Conduit Water, for the use of the Market. There are two other Passages unto it, that is, one out of St. Laurence Lane, besides that which comes out of Cheapside; which Passages are inhabited by Grocers, Fishmongers, Poulterers, Victuallers, and Cheesemongers. On the Northwest corner of this Market, is Robinhood Alley, being a passage into Milkstreet. Trump Alley, lieth against Bow Church; which, turning Eastward, falleth into St. Laurence Lane: This Alley is indifferent good in the middle part, but the entrances are but narrow.[10]

The Courts and Alleys in this Street [sc. Milk Street], are, Castle Tavern Court, so called from the Castle Tavern therein seated. It hath a narrow passage into Woodstreet. Feathers Court, pretty long and open, with a Free stone Pavement. Robin Hood Alley, hath a passage into Honey lane Market. Crown Court, but small. Mumfords Court, a good large Place, well built, with a Free stone Pavement. About the middle, is a passage into Castle Court, or Alley; which is likewise long, falling into St. Laurence lane, and well inhabited. Clement Court, a very handsome open Place, with good Houses; and hath a Passage up Steps into Fryers Court, which leads into Woodstreet.[11]