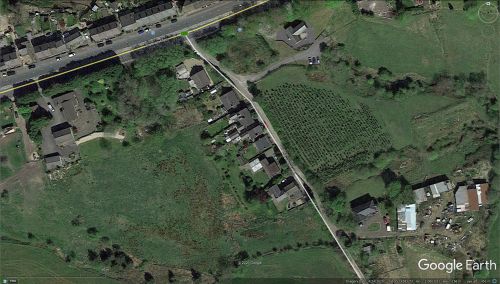 The figure is said to have been found near a well near Carrhouse Lane in Mottram Moor / Google Earth.

A sculpture found at or near a well on or near Carrhouse Lane in Mottram Moor was believed locally to depict Robin Hood and was accordingly known under that name.

The artifact was described as follows in 1998:

[...] an attractive squatting full-size figure from Mottram Moor which may depict a native hunting deity. This figure is a half-life sized sculpture carved in one piece upon a low square plinth. Found near a spring, the figure once carried a bow which has since been lost, as at some stage the carving has been damaged [p. 229:] resulting in the loss of the left hand. [...] the circumstances of its original discovery remain unclear but in local tradition the figure was known as "Robin Hood" and a public house near the find-spot took its name from the local traditions surrounding the figure. [...] the "squatting" figure is [...] enigmatic in style due to the rarity of Celtic depiction of the full human figure. The face shows typical "Celtic" features in respect of the small lentoid eyes and individual curls of hair carved upon the head in Graceo-Roman style, and wears a short tunic which can be compared with figures known from Gaul, of second century AD date.[1]

Comparable figures are known from Northumberland, Lancashire and South Yorkshire. It has been suggested that the head of the figure was reworked at some point to remove a hood or horns and that the sculpture depicts Cernunnos. If its date remains uncertain, the sculpture bears clear marks of Romano-Celtic influence.[2]

A look at the early 6" O.S. maps listed below will make it clear that there were several wells in the immediate vicinity, any of which may have been that where the sculpture was found. The coordinate indicated on the interactive map on this page is or was the location of one of these wells. It is quite unclear if this is the well in question. The artifact was acquired by Manchester Museum in 1974.[3] The local traditions were first recorded as late as 1993 and 1996.[4] If the name of the public house was in fact inspired by the sculpture, the latter would have to have been discovered no later than 1798, when the Robin Hood public house first figures in the records. While this is of course possible, it must be noted that IRHB currently includes information on 236 public houses named after Robin Hood, and with the possible – though not likely – exception of this at Mottram Moor, not one of them seems to have needed such an exotic reason to acquire the name Robin Hood. In all probability the Robin Hood Farm also situated on Carrhouse Lane was named after the public house, but of course it might also owe its name to the sculpture if this were recorded before 1798.