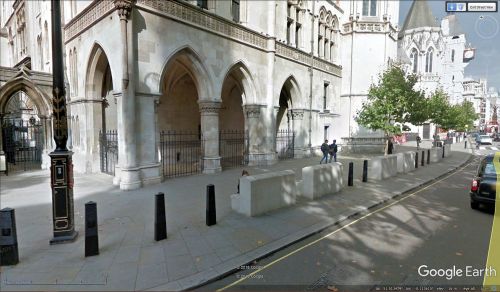 The Robin Hood and Little John was probably located somewhere within the area now occupied by the Royal Courts of Justice / Google Earth Street View. 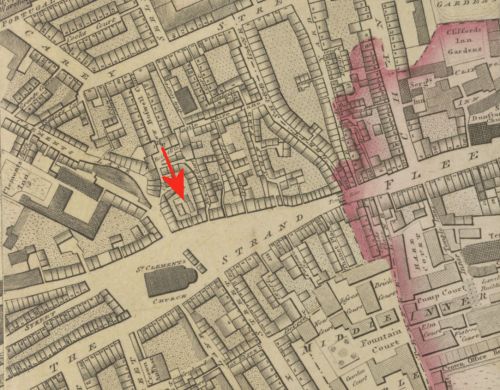 The Robin Hood and Little John was probably located in the area indicated by the red arrow / Adapted from Richard Horwood's Plan of the Cities of London and Westminster (1792-99) at Romantic London.

The present precincts of the Royal Courts of Justice were a warren of gutters and 'courts' in the mid-18th century. One such street, Newastle Court, evidently had a 'sub-court' named 'Robin Hood Court' after the public house. The members of the Societie for Free and Candyd Enquirie, established in 1613, had met for their weekly debating nights first at members' homes, later at a public house in Essex Street before finally moving to the Robin Hood in 1747,[1] and thereupon adopting the new or alternative name of the Robin Hood Society. While IRHB has as yet found no reference to this pub older than 1747, it is clear from accounts of the debating society that the pub was already well-established when it moved there.

See also the page on Robin Hood Court (St Clement Danes), for a more detailed discussion of the topography of the area, and the page on the Robin Hood Society.

From the Whitehall Evening Post.
Whereas an Advertisement was published in the Whitehall Evening-Post, on Thursday last, intimating that a Court of Common Sense would be held on Monday the 28th of this Instant, at the Sign of the Robin-Hood in the Butcher Row, for my Trial, requiring all Archbishops &c. to make strict Search for me, &c. with a Promise of clear Stage and all Favour: This is to give Notice, That as I never was fond of Them, so I never will be found of Them, not expecting any more Favour from a Gang of Robertsmen, assembled in the Butcher-Row, than from a Portuguese or Spanish Inquisition; but am resolved to abscond and hide myself till the Commencement of the Grand Milennium, when I will make a full Display of myself, like the Day spring from on High, and will mount the Shoulders of wicked Will. Wh–st–n, who shall carry me Headlong to Jerusalem, when I shall be found of all Men. CHRISTIANITY
Witness PYTHAGORAS.
N. B. The above Advertisement being sent on Saturday, was too late to be inserted in this Paper.[2]