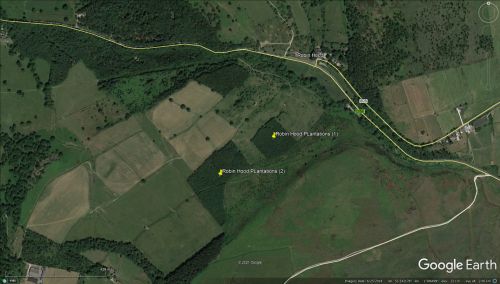 The Robin Hood Plantations in the hamlet of Robin Hood, Baslow, were known under that name by 1922.

They are named on a 25" O.S. map of the area published in 1922, based on a revision carried out in 1919, and on a 6" O.S. map published 1923, based on a revision prepared 1919–20. They are included, but not named, on earlier and later O.S. maps of the area, the earliest dating from 1883. The northernmost of the two plantations is situated 'c. 260 metres south of the A219, near the Emperor Stream. A fairly recent blog post mentioning 'Robin Hood Plantation' suggests that the name is still current.[1]

Maps of the area.