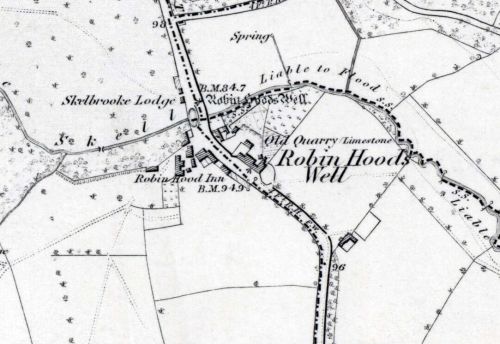 Round Robin Hood's Well in Barnsdale a now vanished hamlet of the same name formed during the 17th and 18th centuries, when the well was one of the must-see sites for tourists and travellers along the Great North Road. That this development was due to the brisk trade the travellers brought is suggested by the fact that this tiny hamlet of ten or fewer houses straddling the Great North Road boasted not one but two inns.[1] It will hardly surprise anybody that one of them was called the Robin Hood Inn. It is indicated by this name on 6" O.S. map Sheet 264, published in 1854 but based on a survey of the area carried out in 1849 (see Maps section below). The earliest reference found so far occurs in Edward Miller's History and Antiquities of Doncaster and its Vicinity (see Allusions below).

According to a recent writer, the inn possessed a special attraction in the form of a leather bottle that was said to have belonged to Robin Hood, but he cites no source, and I suspect he has confused the inn at Robin Hood's Well in Barnsdale with that at the well of the same name in Nottingham, where a small collection of alleged Robin Hood relics included a three-pint leather bottle.

1804 - Miller, Edward - History and Antiquities of Doncaster and its Vicinity (2)

From its vicinity to Barnsdale, Skelbroke was frequently visited by the celebrated Robin Hood, and his companions, who flourished in the reign of Richard I. and there is a well here, in the high road between Doncaster and York, still called Robin Hood's Well, as before-mentioned. Near this well, is a small inn, with Robin Hood for its sign.[2]