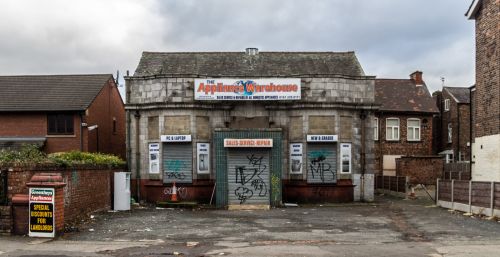 For a couple of decades or longer, the former Robin Hood Hotel was The Appliance Warehouse / Peter McDermott, 22 Nov. 2015, Creative Commons, via Geograph.

In existence by 1925,[1] the Robin Hood seems to have closed at some point in the 1980s, after which time it was an appliances shop for many years.[2]

Pub History, which lists publican information for 1929,[3] cites the address of the pub as both 2 Maine Road and Upper Lloyd Street. These are neighbouring parallel streets, and the buildings at 37 Upper Lloyd Street[4] and 2 Maine Road are back to back. On the Google satellite image they appear to be connected by various extensions that do not seem to be of recent date. The Robin Hood Hotel may therefore well have occupied both in its heyday. O.S. maps from 1923 on (see Maps section below) indicate a public house at 2 Maine Road, so it seems likely that the establishment started there and then later took over the house on Upper Lloyd Street.