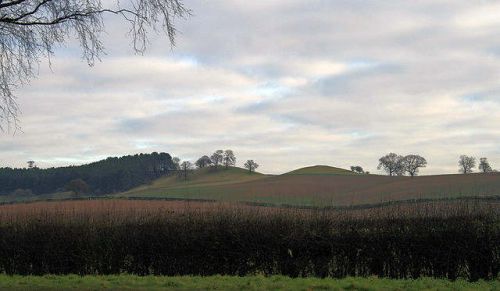 Robin Hood Hill with Loath Hill, believed to have been a Roman fortification, immediately to the north / © Martin Jones, Creative Commons, via Geograph.

Gover, Mawer and Stenton in the English Place-Name Society's volume on Nottinghamshire do not provide any reference or first date for this place-name; instead they refer to the place-name Robin Hood Pit, which is first mentioned in an O.S. map published c. 1825.[1] Robin Hood Hill is a tumulus, and the noun 'pit' may mean 'grave', but it seems unlikely that pit' should have been used for 'mound' since they are opposites in their primary significations. Perhaps the c. 1825 O.S. map was also their source for Robin Hood Hill, but until IRHB gets access to this, the earliest verified source is the 1843 tithe award for the parish of Oxton, which was not consulted by Gover, Mawer and Stenton. It lists 'Robin Hood Hill' under 'Rectorial Glebe' with Ann Sherbrooke as 'Lessee Secunda Pars', Samuel Simpson as occupier, 'Arable' as 'State of Cultivation' and an area of 1 acre, 2 roods and 27 perches (6753.19 m2).[2] The tithe map cannot be found, but the place-name is included in the 6" O.S. map of the area published in 1884. Immediately north of Robin Hood Hill is Loath Hill, which according to Martin Jones, who took the photograph shown below, 'is thought to have been a Roman fortification'.[3]