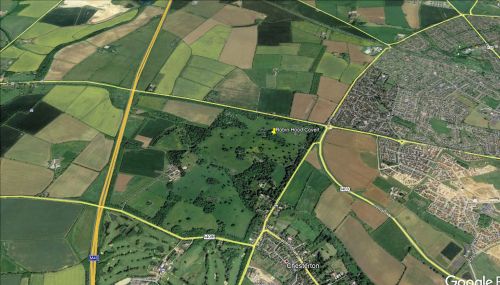 A spinney near the north-east corner of what is now the golf course of Bicester Hotel Golf and Spa – at the intersection of the A4095 and Middleton Stoney Road – was known as 'Robin Hood Covert' by 1922 (see Maps below).

As the covert is only labelled on the 25" O.S. map of the area issued that year, it is not clear if the name is still current. There have been several changes of ownership of Bignell House and Park,[1] and part of the grounds are now a golf course open to members of the public. It would not be surprising if the name of the covert had been forgotten, but the spinney is still around, as can be seen in the Google Maps Street View photo included below.

The covert is entered here as a 'Natural feature': for statistical purposes IRHB does not distinguish between wild and planted plants.